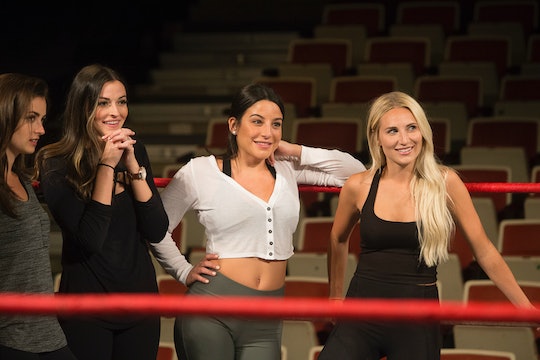 Arie Sent A Fan Favorite Home On 'The Bachelor'

It's the nature of The Bachelor game for people to get sent home. But sometimes those goodbyes hurt more than others. This week, my personal favorite was sent packing. So why did Arie send Bibiana home on The Bachelor? She was a favorite with fans across the country, and everyone is sad to see her go. Well, it's possible that Krystal isn't terribly heartbroken that straight-talking Bibiana was sent home at the end of the rose ceremony.

Bibiana made a name for herself at the beginning of the series not for her chemistry with Arie, but for her frustrations when she did not as much time with the leading man as the other women. Sadly, all her efforts in the third week of the competition did not turn out the way that she was hoping they would. She was one half of the first major fight of the season when Krystal interrupted her time with Arie (even though Krystal already had a rose of her own). Bibiana wasted no time in telling Krystal exactly what everyone else in the house thought of her. Unfortunately, perhaps because Bibiana didn't get the same amount of time with Arie as the other women, she was sent home after the third week.

Probably the first clue that viewers got that Bibiana wasn't long for this show was when she tried to tell Arie about how Krystal's behavior was disrespectful to the other women's time. She said this right after Krystal got Arie to all but say she was leading the pack. Everybody who's a fan of this show knows that people who tattle are some of the first to get sent home on the show. Sure, the "villains" don't usually make it to the end either, but they stick around way longer than the ones who tell the lead that everyone's unhappy with a certain person.

More tragically, at her last cocktail party, Bibiana was determined to make the most of her one-on-one time with Arie. She set up a day bed with candles all around it and a telescope for stargazing, which she thought would be really special to share. "I wanted to create something where he could see that this was supposed to be about us," she said. Unfortunately, Arie stumbled upon this set-up with another woman, and then another, and then another, all before Bibiana got a chance to make the most of her handiwork. "The devil is working OT, man," she said when she saw that somebody else had taken her spot. Seriously, Arie, you are missing out with this girl.

Even though Bibiana was one of the earliest women to be sent home, she still lights up my life with her Twitter feed and her real-time reactions to the show. All I can hope for at this point is that Bibiana appears on further Bachelor spinoff shows. If there is one thing that Bachelor in Paradise needs, it is a no-nonsense woman like Bibiana to make everybody stop and look around at what they're doing on cameras. More Bibiana please.

After she was sent home, Bibiana was clearly hurt, but she was also refreshingly mature about the whole situation. There is no denying that Bibiana got a raw deal on this show. In her closing interview she said, "I don't deserve this," while adding, "Someone needs to just give me a break." I think we can all agree on that. But she finished by saying, "I am broken and I want everyone to know I have tried. But you can't force something that's not there." That is undeniably true. So my only comfort is that somebody is going to fall in love with this wonderful woman very soon. Hang in there, girl.