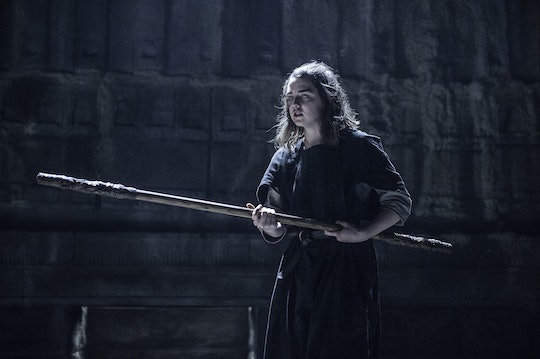 Why Arya Killed Walder Frey's People On 'Game Of Thrones'

The first episode of Game of Thrones Season 7 started off with some serious bloodshed, proving that this season isn't playing around. In the unprecedented cold open, Arya Stark paid homage to the Red Wedding by murdering all of House Frey at a feast. But why did Arya kill Walder Frey's people on Game of Thrones?

Her reason was simple, and she explained it to Walder's young wife as soon as the deed was done. She wanted Walder's wife to share the news of what had happened and the explanation for it: the North remembers, and winter had come for House Frey because of their own wrongdoings. Though the Red Wedding was years past, Arya had never forgotten what was done to her family, and she wasn't going to let the Freys get away with it. At the end of Season 6, she killed Walder and his sons (whom she first fed to him in a pie) but that wasn't enough. And her methods for continuing her revenge were similarly ingenious.

When the episode began, it wasn't clear at first what was going on because Walder himself was addressing all of his men in the Frey hall — and Walder was supposed to be dead. But Arya's plot was revealed soon enough.

Arya learned more than a few useful skills during her time with the Faceless Men, but none served her so well as the ability to appear as anyone she wanted. She tricked Walder in Season 6 by changing her appearance to that of his servant girl so she could get into the castle undetected to carry out her murder of him and his sons. She used that same skill to kill Walder's people in the Season 7 premiere.

She took on Walder's face so that she could call for a feast and lull everyone into a false sense of security. Once she had everyone gathered and celebrating, she (as Walder) reminded them of their murder of the Starks in detail. They didn't show an ounce of remorse (in fact, they seemed quite proud of themselves) making it all the more satisfying when the poisoned wine Arya served them began to take effect. One of the few saved from death was Walder's innocent wife, who lived to tell the tale of Arya's revenge.

Now that Arya has returned to Westeros, she's prepared to follow through on checking off all the names on her vengeance Christmas list. Watch out, Cersei: no one is safe.