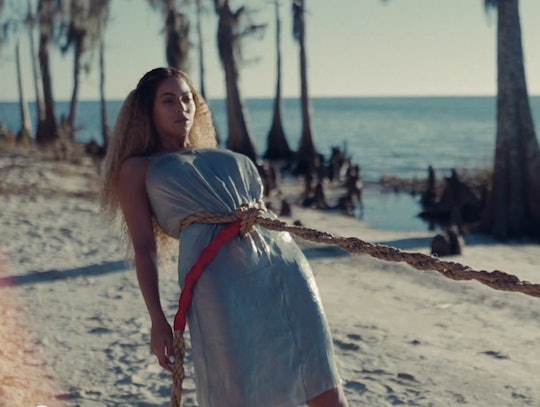 Why Did Beyonce Write 'Lemonade'? She Hasn't Spoken Out Since Releasing The Album

Beyoncé's visual album, Lemonade, hit screens across the world this past weekend, and since then, fans and critics alike have been abuzz as to the meaning behind Lemonade. Was she responding to critics? Was the album her way of shooting down the patriarchy? Was she just doing an extended character concept? Basically, what it comes down to is one simple question. Why did Beyoncé write Lemonade? Since Beyoncé hasn't spoken out about it publicly — and she's not usually inclined to do interviews — there's really only theories as to why Beyoncé decided to pen Lemonade.

Some — or, ahem, many — say that the visual album is a response to her husband Jay Z's alleged infidelity, which has been rumored since what feels like the beginning of time. (Although that whole video of Solange Knowles railing on Jay Z in an elevator in 2014 didn't necessarily help quash rumors.) Plenty of fans and critics have seen Lemonade as Beyoncé's artistic way of admitting her husband's betrayal to the world — and they're referring to that as fact. As one New York Times review put it: "Beyoncé makes 'lemonade' out of marital strife." The Daily Beast lauded the album as Beyoncé's way of handily reprimanding her spouse for alleged marital mistakes:

[Beyoncé] adds a little aside for Jay Z, in case he hasn’t gotten the memo yet (can someone give Mr. Carter their HBOGo login info already?): 'If you try this shit again, you’re gon’ lose your wife.' And then she drops her freaking wedding ring.

There are, of course, hints that suspicious fans could link directly back to Beyoncé and Jay Z's marriage. The line "Here lies the mother of my children both living and dead," from the track "Apathy" could refer to daughter Blue Ivy, as well as the baby the couple miscarried several years ago. She refers to "the baddest woman in the game," and warns, as The Daily Beast noted, "If you try this shit again, you’re gon’ lose your wife."

That's a theory that some dispute, however. Beyoncé's unauthorized biographer spoke to Cosmopolitan recently, and he argued that Beyoncé would not air her dirty laundry to the world. "I think that she's also a very calculating career strategist who understands how to take full advantage of the popular narrative about her life, and the popular narrative about her life right now is that she and Jay Z are having marital problems," biographer J. Randy Taraborrelli said. He told the magazine:

Now, I'm not a psychic, I'm a biographer, and I can't say that Jay Z didn't have a one-night stand in a tour bus a week ago, but I do know from my studying of Beyoncé [that] her personality is such that if in fact she was actually having marital problems, she would not be sitting down writing songs about it for the nation to dissect and interpret. That's not who she is. She's too private a person to handle her marital dysfunction for the world to see and examine.

I mean, personally? I'd be surprised if this wasn't an album about Beyoncé and Jay Z's marriage. But I think there's far more to it: A story of infidelity serves as a base for far more pressing problems. Beyoncé is affirming the strife of a hundred women, a thousand women, who have been betrayed by men and society, and the entire album is a reaffirmation of womanism. By quoting Malcolm X, throwing us images of her Southern youth, and thanking her grandmother, she is praising generations of strong black women. As Ijeoma Oluo wrote for The Guardian:

Whatever the reason behind her newest album — whether she wanted to deliver a powerful album on womanism, work through her own marital problems, or simply saw a smart career move — Beyoncé managed to produce a moving, emotional album that hit all the right notes. And after all, art is what you see in it, right? Unless Beyoncé magically grants a new interview, fans are probably free to see what they'd like in the visual album.