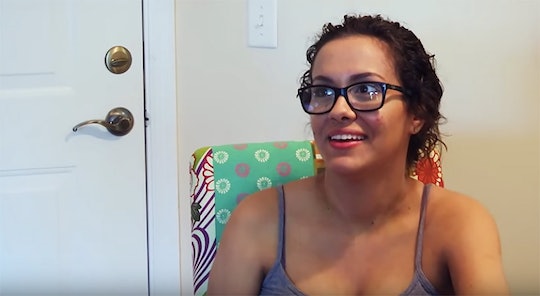 Once upon a time on 16 & Pregnant, Briana and Devoin were teenage parents struggling to make their relationship work. The two parted ways while their daughter, Nova, was still an infant and they haven't always seen eye to eye throughout the years. But now that the two are on good terms again, some fans are wondering why Briana and Devoin broke up in the first place.

Devoin and Briana's pre-Teen Mom 2 relationship was rocky at best. Briana claimed during the Teen Mom 3 (remember when that was a thing?) reunion in December 2013 that Devoin barely saw Nova, an allegation he openly copped to at the time. After admitting that he didn't know what type of formula Nova drinks, Briana responded, according to the Ashley's Reality Roundup: “She drinks whole milk! She don’t drink formula no more!”

Another issue in their romance was Devoin's habit of getting into trouble. I won't get into the entire rap sheet here, but it's fairly long. Briana's mom, Roxanne, even got an order of protection against him at one point.

“He is very intimidating and after researching him, I see his background of guns, fighting, postings on Facebook, drugs, weapons and violence,” Roxanne alleged, according to The Inquisitr. “I am in fear for my safety and my family’s.”

To his credit, however, Devoin is trying to make positive changes in his life. The dad has tried to build a stronger relationship with Nova in recent years, and he helped Briana recover from surgery. But don't assume Devoin's transformation means he'll get back together with Briana anytime soon.

“For people questioning if I would get back with Devoin, the answer is a definite no lol,” she explained according to Blasting News. “As I previously stated, Devoin showed up to help me recover from my surgery and more so help me with my daughters, one of which (as fans know) happens to be his."

Driving her point home, Briana continued: "It’s called him helping to co-parent and helping me out during a time of need. There’s nothing more to it and I would never, ever get back with him.”

Briana is also dating someone new, a guy reportedly named Johnny Rodriguez. The two started dating in September 2018, with Briana writing on Instagram, according to Us Weekly: "My sweet love, thank you for shining your light into the darkness that was surrounding me.”

But don't expect Briana to open up about her guy anytime soon. “For now I’m keeping it private as I don’t know if I’m ready to put it out there,” she explained, according to Us Weekly.

Of course, it's possible Briana changed her mind, meaning that Johnny could make an appearance on Season 9. You never know.

Either way, Briana is committed to her two daughters no matter who she might be dating at the moment. “I really can’t believe I have these two in my life,” she wrote on Instagram Stories in late December 2018, according to OK! magazine. “They bring so much joy into my life.”

See? It doesn't really matter why Devoin and Briana broke up, and it's not important whether they'll ever get back together. At the end of the day, what really counts are the relationships Briana has with her adorable kiddos.