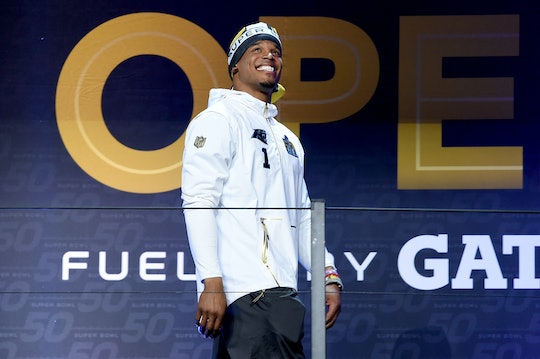 Why Did Cam Newton Name His Son "Chosen?" The NFL Star Selected The Name For A Very Specific Reason

Carolina Panthers quarterback Cam Newton welcomed his first bundle of joy this past Christmas Eve, but along with celebrating the MVP candidate's induction into fatherhood, many fans were left scratching their heads: Why did Cam Newton name his son "Chosen?" The little guy's full given name is Chosen Sebastian Newton, which, along with sounding very distinguished, also sounds somewhat messianic.

Luckily, we don't have to guess, because Newton explained the whole thing to a group of reporters last month. "I wanted something that would be masculine ... yet unique,” Newton said. He added that many expected him to name his son Cam Jr., but he's not a fan of the whole junior thing because "I don’t want to have the pressure of him being a 'junior.'"

Well, of course the pressure of a junior would be just terrible, but “chosen” seems to come with a certain pressure, too. The irony of the situation is not lost on Newton, who said that when he explains the no-pressure logic behind not going with junior, people tend to respond with “What the hell do you think Chosen’s going to bring?” Which is a completely valid point that Newton doesn't really address any further, but he does wear Chosen-centric clothing to football practice. So, you know, no pressure.

Newton's new gear included a t-shirt with a graphic of him and his son "dabbing" together, plus socks featuring Chosen's date of birth. It remains to be seen whether Newton will continue to keep the pressure off his newborn son by featuring Chosen clothing at the Super Bowl. We'll find out soon enough. Newton's Panthers will face off against Peyton Manning and the Denver Broncos on Feb. 7.

Really, though, little Chosen shouldn't feel too much pressure just because his dad wears shirts and socks in his honor, because Newton also wore $849 zebra-striped Versace pants on his plane to California this week.

So remember, little Chosen, that it's all relative. You can be chosen for whatever you want, even Zebra-striped pants.