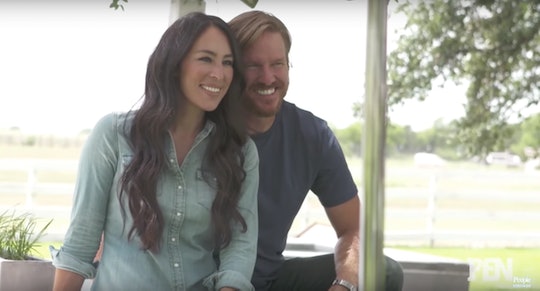 Chip Gaines Reveals Why Joanna Almost Broke Up With Him

Unless you've been living under a rock for the past few years, you've probably heard of Chip and Joanna Gaines. Or, at the very least, you've heard of the hit HGTV show, Fixer Upper. The series, which follows the Waco, Texas, couple as they turn dilapidated old houses into farmhouse chic homes has been enchanting viewers for four years now, shows no signs of going anywhere. But things weren't always as glamorous for the Gaines as they appear to be. Yes, you read that headline correctly, so, just why did Chip and Joanna Gaines almost split up at one point in their relationship? The truth is a lot sweeter than you might think.

The business owners, stars of a hit show, and parents to Drake, 12, Ella, 10, Duke, 9, and Emmie, 7, haven't always lived such a charmed life. In a new memoir, Capital Gaines: Smart Things I Learned Doing Stupid Stuff, Chip details an important lesson he learned at the beginning of his relationship with Joanna. Believe it or not, as TODAY reported, the infamous Gaines couple almost split up over... a trip to Mexico? Yes, as odd as it may sound, when Chip and Joanna had only been together for six short months, Chip took off to Mexico, leaving his business in the hands of a capable, albeit confused, Joanna.

As Chip described in his upcoming book, he was "knee-deep in three different businesses, and [had] been working with the same group of Mexican guys on all of them." However, as happy as Chip was to work with his crew, there was a bit of a problem: his Spanish was severely lacking. But, there was a possible solution, according to his memoir:

When I heard about a Spanish immersion program on the coast of Mexico, I was definitely interested. As I looked into the three-month long program and learned more about it, I felt internally resolved to go for it.

After Chip told Joanna about his idea, who was extremely supportive of the plan, he took off, leaving his businesses in the hands of a young Joanna. But, all was not as pleasant as it might have sounded.

After only 14 days in Mexico, Chip got an angry phone call from his then-girlfriend Joanna, who was appalled at how he had handled his businesses before leaving the country.

"All these people are coming to my dad's shop demanding to be paid, and there's no money! Lucky for you, your dad is bailing your sorry butt out," Joanna told him, according to his memoir. "You have three days to get back to Texas or this relationship is over."

Obviously, Joanna was not having any of Chip's foolishness, and good for her. After that, Chip did get his butt back home, and the two have been happily together ever since. And after that, wrote Chip, "it became my mission to prove to Jo, my parents, her parents and myself that I could do this."

And clearly, he's learned his lesson.