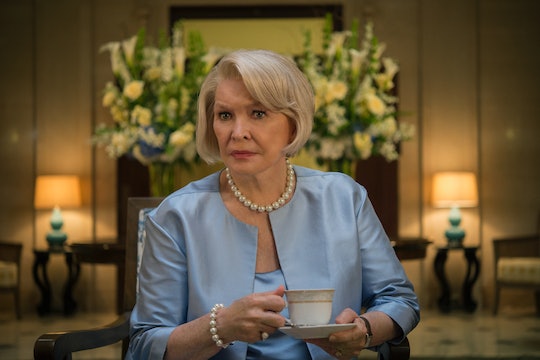 Why Did Claire Stop Talking To Her Mom? This 'House Of Cards' Storyline Is Intense

House of Cards Season 4 brought us a slew of new material to work with, of which includes probably its most important relationship yet: Claire Underwood and her mom, Elizabeth Hale. It was clear from the get-go that the two have an incredibly strained relationship, but what happened to cause that, and perhaps more importantly, why did Claire stop talking to her mom in the first place? House of Cards only added fuel to the proverbial fire (which could quite easily become a literal fire because this House of Cards and it is totally acceptable for characters to do terrible things to each other) by putting the two women together right at the beginning of the season — but that makes it all the more interesting to watch.

I'm not going to lie, when Claire first walks into the Hale home in Highland Park in Dallas, Texas, like 15 minutes into the start of Season 4, I had loosely figured that she'd be walking into an off-the-radar estate that would keep her far and away from Frank's unforgiving reach. Lo and behold, she was headed home, but not to find herself or to recenter her well, center. No, Claire Underwood doesn't do that sh*t. Claire had a plan — a plan with two heads: first, to secure a seat in Congress by any means necessary (which included uprooting a family dynasty years in the making), and second, to make that personal win sting so hard in the face of Frank's push for a return ticket to the White House. Long before any of that ever even had the chance to get off the ground, we met Hale, and things veered off course pretty quickly from there.

First, the obvious question: Why did the mother-daughter duo stop talking? And how did things get this bad? It's hard to officially speculate since we're only one episode in, but given the fact that Claire has rarely — if ever — mentioned her mother in any capacity on the show, it's safe to say that the distance between the two of these characters isn't exactly a fresh wound their both learning to deal with. Instead, their separation seems practiced and smart; one that's been years in the making, and one that, Hale hints, has everything to do with her daughter's choices. One of which — yep, you guessed it — her marriage to Frank Underwood. Hale's seething distaste for her son-in-law is made immediately clear, and a far as things go for Frank, the feeling seems pretty mutual. Hale's quick jabs at Frank's upbringing (she so lovingly refers to him as "trash") coupled with her A+ insult aimed right at the crack in the couple's incredibly vulnerable marriage (Hale says she knew her daughter would "wake up," but was surprised it took her 30 years to do so), make it clear that she's not just out for insults — she's out for blood. Funnily enough, it's a character trait they all share.

Jumping ahead, it isn't just disappointment for her choice in life partner that displays the estranged relationship between Hale and Claire Underwood so clearly. Both seem to be holding on to years and years of frustration, disappointment, and anger toward the other — and though, again, it feels way too soon to jump to any one conclusion about why they're not talking, it seems like all the puzzle pieces are on the board and ready to move into place: Frank Underwood, politics, the death of Claire's dad, and possibly even Claire's return to Dallas. Yet there is this really telling moment when, after Hale's three-year battle with Lymphoma is revealed, Claire breaks down in tears and the only comfort is her mother's embrace. It makes me naively hopeful that not all has been lost between these two quite yet. Unfortunately, I know better, and because this is House of Cards, I'm more than certain the skeletons hiding between them will be called out of the closet sooner rather than later.