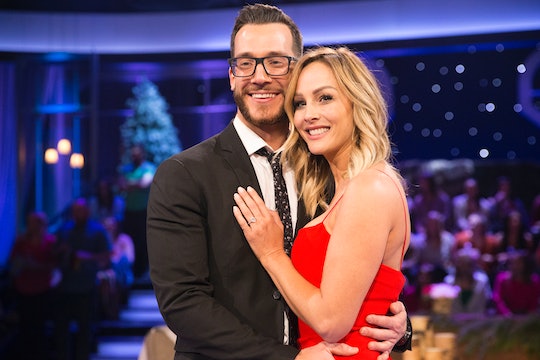 I didn't believe that two people really could fall in love on Bachelor Winter Games and then Clare Crawley and Benoit Beauséjour-Savard made me change my mind when they got engaged during the reunion special after the finale. But now that their nuptials have officially been called off, it turns out I was right all along. So why did Clare and Benoit break up? They got engaged after The Bachelor Winter Games stopped filming, but now it appears that the wedding is officially canceled and also so is my belief in love.

In identical Instagram posts on Friday, the couple released a statement explaining that life is different when you're in front of a camera than when you're not, and that they tried to make it work but in the end it just wasn't able to work out. They also said firmly that no ugly comments about one or the other would be tolerated on either of their pages. It was a mature, respectful statement that I can't fully appreciate because I'm too busy wiping tears away from my keyboard as I type this. Of all the couples to come out of the wild world that is The Bachelor, I was really hoping this one would make it. If only because Benoit seemed so very earnest the whole time.

We understand A lot of you have been asking about our relationship since the show, and we wanted to thank you all for the love and respect as we navigated it in real life off camera. We do understand however, having a public engagement on TV kind of changes that. It's with a heavy heart that we have mutually decided to end our relationship. We think the world of eachother [sic], and we were both hoping we could make this work. I'm sorry that this may not be what you want to hear, but it's our truth. Just know there are no negative feelings here, we are simply two people who believed in love, and were open enough to give it a chance. We still care for each other very deeply (That is why no hate or disrespectful comments will be tolerated about the other.) Please respect our privacy as well, as with the end of any relationship, it is never easy. Thank you for your understanding and love while we have shared our vulnerability with the world. ❤️Clare & Benoît

The Bachelor Winter Games premiered concurrent with the Winter Olympics in February. The spinoff show was formatted similarly to the Bachelor spinoff Bachelor in Paradise except in this case the contestants had to compete in winter sports for date cards. It was a lot of silly fun, but not everybody got a love connection. In fact, it looked like Clare and Benoit were going to be the first real breakup of the season.

The two hit it off right away on night one, cooking together and stealing occasional kisses. But Clare wasn't ready to settle down with one guy right at the beginning. She still had her eye on Christian and wanted to learn more about him before she made any commitments. This just seemed smart in my opinion. But Benoit already had some strong feelings, and didn't want to wait around for Clare to make up her mind, so he left. This is also reasonable. Christian, as it turns out, was definitely not the guy for Clare, and all seemed lost, until it was revealed on the reunion special that Clare and Benoit had been secretly dating since the show finished airing. And then Benoit proposed right then and there.

I know so many of the relationships that start on The Bachelor don't work out in the long run. But I was really pulling for this one.