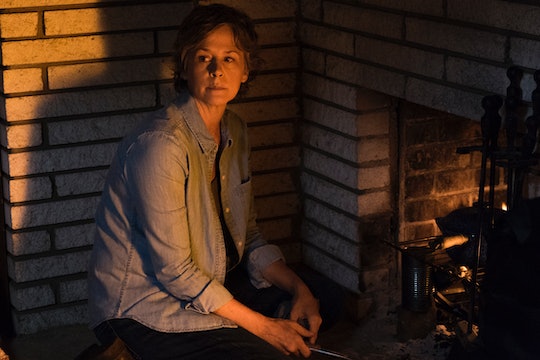 After so many episodes apart, Daryl and Carol finally reunited on The Walking Dead in "New Best Friends." Carol's decision to leave Alexandria was a difficult one for her friends (and her fans) to understand, but it was especially tough on Daryl because of how close they were. Their reunion was heartwarming, but it had a layer of tragedy to it: there was so much Carol didn't know about what the Saviors had put everyone through. However, when Daryl got the opportunity to update her on everything, he chose not to. He lied instead. But why did Daryl lie to Carol about the Saviors on The Walking Dead?

At first, Daryl was ready to tell Carol everything that happened since the last time they saw each other. She had no idea that Glenn and Abraham were dead, or that Daryl had been a prisoner. She specifically asked Daryl if everyone was okay, tears in her eyes as she spoke. That may have been the very thing that pushed Daryl into lying: he knew that she would be ready to slaughter the Saviors if she knew what they'd done, and he knew that she didn't want to be that person anymore. Even though it was hard, he was trying to respect the choice she made to stay out of things.

There was no doubt that Daryl wanted Carol on their side for the fight to come, but that was before he saw how much pain she was in. She had already been struggling so much with the person she turned into after the apocalypse, the person she had to become to survive, that she had to remove herself entirely from the world; if she got involved again in search of revenge, it would destroy her. Daryl chose to protect her by lying to her.

While protecting someone you love is an understandable instinct, it might not prove to be the best decision. Carol can't stay out of things forever and continue to have a place in the show, so it seems safe to assume that she will learn the truth at some point. She might not be thrilled with the fact that Daryl lied to her, even though he was doing it with her best interests at heart.

He was putting her desires ahead of his own, which was the right choice in the moment, but there's no telling what the future will hold. Daryl didn't want Carol to get hurt, but that might be a fate that's impossible to avoid.