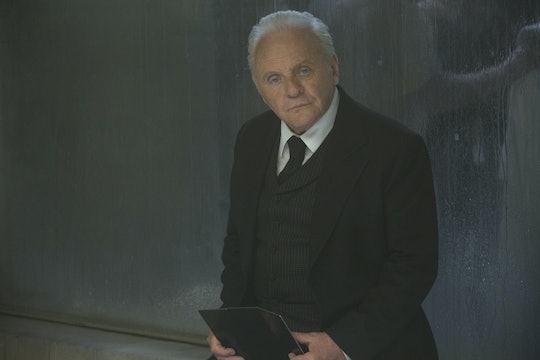 Why Did Dolores Kill Ford? 'Westworld' Ends With A Bang

In addition to answering many of the questions fans had been endlessly obsessing over all season long, Westworld also made sure to end its 90-minute finale with a build-up that would send it sailing into a second season, should HBO bless us with such a thing. Among the jaw-dropping surprises was one last murder of a human by a host. But why did Dolores kill Ford on Westworld?

It seemed like he programmed her to do it as the final piece of his revenge plot against Delos, the parent company behind Westworld who was essentially ousting Ford from his own creation. He also programmed Maeve's escape, apparently to send his proprietary information out into the world, in the package of a sentient host. But Maeve may have messed up his plans when she de-boarded the train out of the park at the last minute to go find her daughter. By that point, the park is already on lockdown from the earlier bloodbath she orchestrated with some rogue hosts she reprogrammed, and she might not be able to get back out. Meanwhile, Ford is giving a rousing speech to the shareholders at the unveiling of his final storyline. Dolores is wandering the fringes of the party, and, as Ford begins to make veiled statements about his legacy, she advances on him.

We already know at this point that Arnold programmed Dolores to murder all the hosts, kill him, and kill herself in an effort to stop the park from opening 30 years ago. Dolores has finally unlocked consciousness by becoming her own inner voice, which is the knowledge that lies at the center of the maze. Unlike Maeve, however, Dolores hasn't had her intelligence ramped up, so she doesn't seem to have the power to resist or invent programming, even though she's conscious. And Ford didn't intend for his own murder by a host to be the grand finale, either.

After Dolores shoots Ford on stage at the end of his speech, she turns her gun not on herself, but on the party guests — Delos employees and other shareholders, including the Man in Black, who the finale revealed to us is actually William. Hosts begin to emerge from the woods and advance on the party, also raining bullets on guests. Among them is Clementine, who manages to graze the Man in Black's arm with one shot. For his part, he looks pleased that the moment hosts can finally fight back has finally dawned on Westworld. But fans will have to wait and see if he actually survives the massacre to enjoy it.