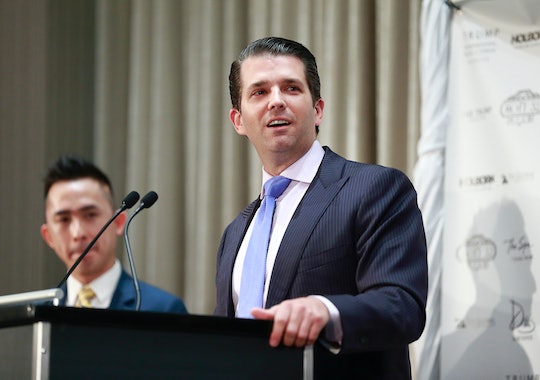 After days of speculation about an alleged Trump campaign meeting with a Russian attorney in 2016, one of the presidents sons took to Twitter Tuesday, evidently attempting to explain. When you read the tweets, though, you have to ask: Why did Donald Trump Jr. tweet his emails with a Russia-connected individual who said they had information that would incriminate Hillary Clinton? The emails themselves seem very incriminating.

The short answer is that The New York Times had reportedly already obtained them. According to one senior media reporter, Michael Calderone of HuffPost, The Times had asked Trump Jr. for an official response to the email controversy by 11 a.m. Eastern Time — "Exactly when he tweeted them out," Calderone noted.

So was it early damage control? Was Trump Jr. simply attempting to get ahead of the curve by releasing the emails before anyone else could and possibly avoid falling into the same trap that Hillary Clinton's camp? Trump Jr. claimed as much in his statement, which he tweeted alongside screenshots of the emails, saying that it was all an attempt to be "transparent."

Regardless, it was a poor move on Trump Jr.'s part; This wasn't simply some bundle of harmless daily missives, it was essentially the smoking gun that many journalists and investigators had been hunting down for months. As former Times contributor Jared Yates Sexton joked in a tweet on Tuesday, "I...worked on this story for a year...and...he just...he tweeted it out. ... So many people out there were trying to track this down. And it just...got delivered on a tweet. What the hell[?]"

It could be argued that perhaps Trump Jr. simply didn't understand the ramifications of tweeting out an email that effectively served as the final nail in his coffin (though, make no mistake, it's practically a guarantee that the Trump camp will try to spin this gaffe as some sort of clever chess move). After all, House Speaker Paul Ryan, a former Trump foe himself, has previously defended the administration's and Trump family's missteps by brushing them off as mistakes made by inexperienced political greenhorns.

But this email chain in particular is almost inexcusable — and as former vice presidential candidate and Virginia Sen. Tim Kaine put it in an interview with MSNBC,

These emails are very explosive. They should have turned this over to law enforcement immediately. Instead, they had this very, very troubling meeting. This is just wheelbarrows full of new evidence for the special prosecutor and the Senate Intelligence committee.

(As an aside, it's safe to say that Kaine, Clinton's former running mate, would know a thing or two about handling an email controversy with diplomacy and at least some amount of tact.)

Whatever Trump Jr.'s real reasoning for releasing his own emails — whether to be "transparent", to get ahead of The Times, or to establish an appearance of cooperation — their contents are nonetheless damning. And no matter how hard his camp tries to spin this, it's clearly the biggest failure on his part, thus far, in the entirety of his father's rise to power.