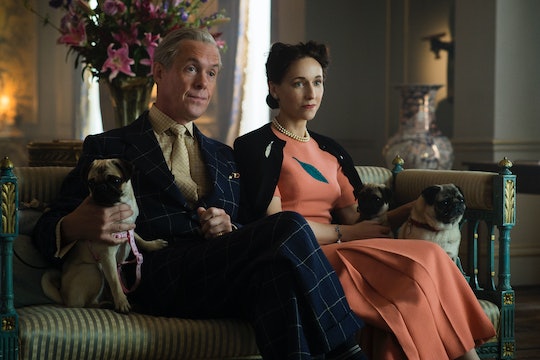 Why Did Edward VIII Abdicate The Throne? 'The Crown' Explores The Reasons He Gave It Up

Netflix's latest original drama, The Crown, gives the world an unprecedented look into the personal lives of the British monarchy, particularly in regards to Queen Elizabeth II, who's reign the series follows. But some peripheral characters are just as interesting, such as her uncle, the former King. So why did Edward VIII abdicate the throne? The Crown explores the rather romantic reasons he decided to give everything up. To put it simply, he did it for love.

Before his father died and he became king, Edward chanced to meet American socialite, Mrs. Wallis Simpson, who was once divorced and currently married, at a house party in 1931. After a series of subsequent meetings, the two were undeniably involved in a full blown affair by 1934, and it became public knowledge that Simpson was preparing to divorce her second husband with the intention of marrying the king. This was a problem because a scandalous American twice-divorced was considered by parliament and the royal family to be the absolute worst choice imaginable for the king to marry. She was believed to be a gold-digger as well as a Nazi sympathizer to boot. And anyway, it was illegal to be married in the Church of England if the divorcee's spouse was still living.

The option of a royal marriage, making Mrs. Simpson the Queen consort, as well as a morganatic marriage, in which she would marry the king but receive no title, were found to be impracticable. Left without other options, the king chose love over duty. He abdicated the throne before he was even coronated, saying in an address broadcast over the radio:

I have found it impossible to carry the heavy burden of responsibility and to discharge my duties as king as I would wish to do without the help and support of the woman I love.

Though the action of The Crown occurs primarily in the time of Queen Elizabeth, many years after the abdication, the story stays true to the events of real life. Following the abdication, the couple married and Edward received the title of Duke of Windsor. They left England, living first in Paris and elsewhere in Europe before being sent to a post in the Bahamas to escape a plot by the Nazis during the war. They eventually returned to Paris, where they mainly lived for the next 35 years of their marriage.

Edward and Wallis may have caused a huge public scandal and more than a little headache for his family, but perhaps love really does conquer all in the end.