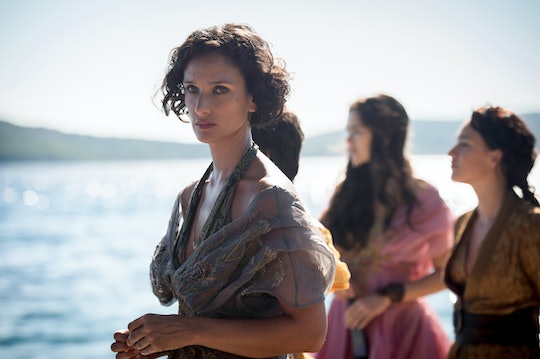 Why Did Ellaria Sand Kill King Doran On 'Game Of Thrones'? Season 6 Is Off To A Bold Start

When Season 5 of Game of Thrones left off, Myrcella was very clearly dead and Ellaria Sand was quite pleased with herself. Though it's pretty obvious why she would want Myrcella dead, the real question is, why did Ellaria Sand kill King Doran on Game of Thrones? Season 6 wasted little time bringing on the carnage, but I'll admit that this was something I didn't absolutely expect in the first 15 minutes of Episode 1. First though, it's important to understand that Dorne doesn't have kings — so "King Doran" is actually Prince Doran, and Sand and her daughters seek revenge on the Lannister family for a number of reasons, chief among them the fact that their father (and Sand's partner), Oberyn Martell, was killed by the Lannisters after he was selected by Tyrion to be his surrogate warrior in a battle that, if won, would have awarded Tyrion his freedom. Martell was killed by The Mountain in a horrifying show of strength by the latter. And even now, I count it as one of the most unnerving deaths I've seen on the show.

Here's where things get murky (and wholly unsettling). Martell was the younger brother of the slain Elia Martell, who was raped and murdered at the hands of Gregor Clegane (The Mountain), years earlier. When Oberyn Martell was crushed by The Mountain years later in a battle he should've never been involved in to begin with, it set in motion a response from Sand and her four daughters. In response to his death, Sand wanted revenge. First, Myrcella. Then, on Oberyn's brother, Prince Doran.

On the show, Prince Doran is incredibly peaceful and calm, a total 180 from the eccentric personality of his younger brother, Oberyn. The death of her partner is crippling for Ellaria Sand, and because of the callous, unwelcoming visit she and Oberyn endured at King's Landing, Sand wants nothing but to reap revenge on the people responsible for the death of the most important person in her life. In order to exact that revenge, Sand needs the king in her corner — and Doran is absolutely not.

Behind his back, Ellaria Sand poisons Myrcella (and it kills her just moments after she realizes the truth about her lineage and her parents), and when word travels back to Doran of her death, Ellaria does the only thing that makes sense: she kills him, too. If you've followed her character development these past few seasons even from a mile away, it wasn't exactly surprising to see Ellaria kill off her brother-in-law. They disagreed on, arguably, the most important issue on the game of thrones: How to get what you want. In Ellaria's mind, it's through death. In Doarn's mind, death isn't the answer. In order to get what she wants, Ellaria needs to rid every weed in her way. The first was Myrcella, and next came Doran. If I were Cersei, I'd sleep with both eyes open — and batten down the hatches as fast as humanly possible.