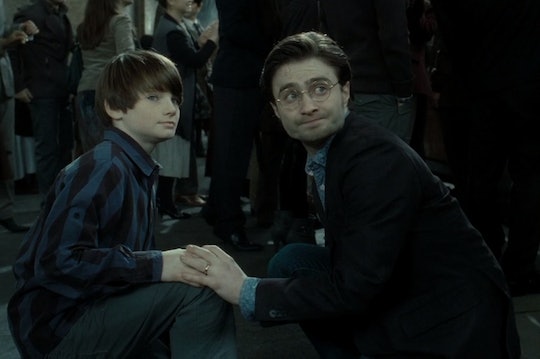 Why Did Harry Potter Name His Son After Snape? J.K. Rowling Reveals The Reason In Twitter Chat With Fans

It has been eight years since Harry Potter and the Deathly Hallows was released, but it seems fans are still divided on one thing — one freakin’ thing: Why did Harry name his son after Severus Snape? And whether you love Snape or hate him (and most of you hate him), you may want to sit down, because J.K. Rowling has unleashed another revelation on the subject.

On Friday, Rowling took to Twitter to talk about why Potter named his son after Snape after one user asked: “Why did you pick Snape to name Harry’s kid after? I’m genuinely curious as he was nothing but abusive towards everyone.” Rowling responded quickly and simply:

Snape died for Harry out of love for Lily. Harry paid him tribute in forgiveness and gratitude.

Clearly, Rowling was right when she also said:

There's a whole essay in why Harry gave his son Snape's name, but the decision goes to the heart of who Harry was, post-war.

But, for those of you still frustrated by Harry's son's name, here’s the thing (well, here’s my humble and, perhaps, unpopular opinion): The Harry/Snape storyline could not have unfolded any differently than it did. Snape was not a good teacher, nor was he what I would call a good person. He was cold, cruel, verbally abusive, and a traitor. But there is also no denying how he came to be that person: He had a difficult childhood, struggled with some very real demons, and — as a result — he made some bad decisions, some of which cost him dearly.

Yet, Snape was also brave, dutiful, and strong. He was a person with extraordinary power who sought redemption. A person who learned from his mistakes and was desperate to make things “right.” A person who didn’t need to be loved or liked to love in return. (And I'm not talking about conventional love — Snape was about self-sacrifice, not hugs and kisses and soothing words.) And he was a person who made the ultimate sacrifice to protect Harry and the Wizarding World.

Was he a bully, and an ass? Absolutely. But was he bad? Was he a monster? No. Harry choosing to name his son after such a flawed man doesn't mean that forgives Snape — it means Harry acknowledges that imperfections are OK. (Imperfections which Harry has seen in his mentors, Remus and Siruis, and within himself.) And isn't that the very essence of humanity? Aren’t we are all some combination of our childhood, our choices, and of good and evil? As Rowling wrote on Friday:

In honouring Snape, Harry hoped in his heart that he too would be forgiven.

And, afterwards, all was indeed well.