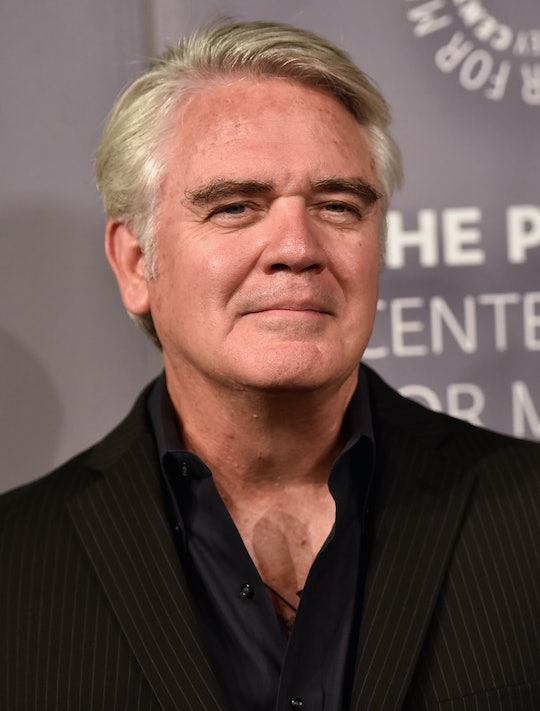 Why Did Healy Try To Kill Himself On 'Orange Is The New Black'? Season 4 Revealed His Past

(Warning: This post contains spoilers from Orange Is the New Black Season 4, Episode 8.) Just when you think you know everything there is to know about an Orange Is the New Black character, season 4 happens and you learn things you didn't realize were even things. While there were plenty of new characters to familiarize yourself with, the OG's of Litchfield continued to surprise us with diverse and complicated backstories. Perhaps one of the most complicated, and heartbreaking, of backstories is that of Healy, the counselor of Litchfield. There's a moment in season 4 that left many viewers asking, "Why did Healy try to kill himself?" only to think back on his life and the moments that have shaped not only the man he is, but the perceptions he has created about the very women he is tasked to guard, protect and be in charge of.

In Episode 11 of Season 4, titled, "People Persons," Healy calls his Russian and estranged wife, Katya, leaving a message in which he essentially apologizes not only for calling so late, but for his perceived failings as a husband, a counselor, a man, a guard and a human. His message reads as follows:

It's Sam. I... I know it's late. I'm sorry for calling. I... I know that I.. that I said that I would stop, and I... I tried, but I don't have anyone I can talk to. I know you felt that you couldn't talk to me, which is ironic because it's my job to talk to people, you know? It's... it's something I've always taken pride in, but it's beginning to feel like... like...I don't know, Katya, maybe... maybe I'm not very good at my job. Probably that shouldn't surprise you. But I've tried. I've really tried so hard, but the harder I try, the worst things seem to get. I'm not saying this to excuse myself for any way I've treated you, but just to say, I'm sorry. No matter what happens... I only want the best for you. You and Pavla. I'm sorry.. calling you so late. I... You don't have to call me back, OK?

Healy then throws his cellphone in the sand of the beach, and proceeds to wade into the water in what is perceived to be a suicide attempt. He looks into the distance, steadfast and sure in his supposed decision, until his cellphone rings. It's easy to believe that he thought it was his wife, Katya, and as soon as he is in the water, he is out. He answers his phone, after realizing it is work, as if he is rejuvenated in his purpose, a purpose he lost sight of.

Earlier in the season, we learn that Healy's mother suffered from some sort of mental illness, and after being forced (by her husband) to undergo frequent lobotomies, she leaves her family and, in turn, Healy. Healy has his last conversation with his mother in their kitchen, where she makes him deviled egg; eggs that he is allergic to, but she doesn't remember because of her latest round of "treatment." She tells her son that doesn't want to do treatment anymore, that the treatments make her feel disconnected and she would rather "hear the angels." Healy says that he doesn't like when his mother, "acts crazy" and, in the end, she runs out the door to "turn off the sprinklers," only to never be seen again.

This moment has clearly shaped Healy in his career choice, his relationships with women and his relationships with the inmates he is now in constant contact with. He finds a counterpoint in Lolly, an inmate who suffers from (presumedly) schizophrenia. Lolly hears voices just like Healy's mother did, and his inability to help her, in the end, mirrors Healy's inability to help his mother.

It's safe to say that Healy attempted suicide because he was lonely, and without a reason to continue living. His wife had left him; He hates his job; His job is constantly being sabotaged by changes in staff or policy or both; He can't seem to help the women he is supposed to be helping. His story adds to the complexity of his character; one that was, at times, very hard to feel for. When he was so obviously homophobic and was sneaky in his decisions if it meant alienating a specific inmate, it was easy to hate Healy. But, like everyone else at Litchfield, Healy si complicated and complex and we're still peeling back the layers that make his character exactly who he is.

I, for one, am glad that Healy's suicide attempt was unsuccessful. I think his character is important not only to the show, but to the ongoing discussion concerning mental health and the stigma our society has attached to it. Healy, the counselor at Litchfield, might not know his purpose, but it's clear what Healy, the character on Orange Is the New Black's, purpose is.