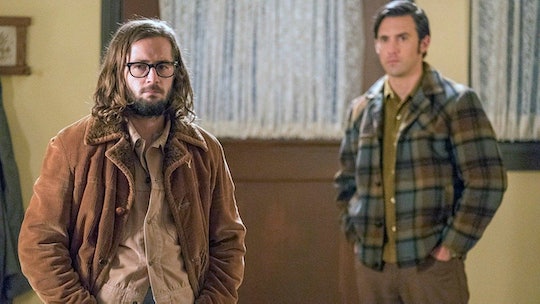 The long-awaited return of This Is Us included a lot for fans to process. Since the fall midseason finale revealed Jack's brother, Nicky, didn't actually die in the Vietnam war, it was implied that Jack knew his brother was alive the whole time and still kept it from his family all those years. So why did Jack lie about Nicky on This Is Us? Kevin and Zoe have already been on one journey for answers. The answer to this question can't be far off — especially because it's kind of huge and changes what you thought you knew about Jack, and the show's direction, in the first place.

There may be no easy answer as to why Jack lied, but I have some theories. When Kevin and Zoe traveled to Vietnam and he first learned the truth about Nicky, there were a few clues hinting that Jack knew Nicky didn't die. There were even clues — if you were paying attention — that may have motivated Jack to hold the lie until his dying day to protect Nicky (or himself). Since then, you've seen the older version of Nicky at the end of the midseason finale but Kevin has yet to uncover all of this himself. After visit with Zoe's ex, a salty Congressman whom she dumped via email (super harsh BTW), he begrudgingly attempted to help Kevin get Nicky's records for more info. Except they didn't really find much other than he'd been medevaced in Vietnam in '71 and sent to Walter Reed for a psych eval, and subsequently "discharged a few months later." I mean, it's something, but it still doesn't tell the whole story.

But Jack's old box of stuff includes one more clue — a "last" postcard to Jack, signed "C.K." This of course could stand for "Clark Kent," the nickname Jack gave Nicky during childhood. Did I mention Nicky's address (in Pennsylvania) is right there on it? Or the fact that, according to Entertainment Weekly, Kev literally asked the same question about Jack saying, "My dad knew he was still alive. Why would he lie to us?"

Though no one except the This Is Us crew knows exactly why Jack kept this news to himself at the moment, the most obvious reason he might lie was to keep his little brother safe. Nicky wasn't cut out for war to begin with, and his time there had already been disastrous. He suffered trauma, got in trouble, and numbed his pain with drugs (causing more trouble). He changed, and was suddenly no longer the scared teen that left for Vietnam. It's only natural that, if Jack found him alive, he should help Nicky go AWOL to live his life out away from everything Vietnam did to him.

Or it could be that Jack didn't know Nicky survived after all. Although unlikely, Jack may have left Vietnam thinking Nicky died, and when he received those postcards, he'd have understood Nicky was alive but that he shouldn't contact him because it could get one of them in trouble. It's a long shot but that's the beauty of this show. They do the things you don't expect them to.

In November, Milo Ventimiglia addressed the mystery surrounding Nicky saying, "Did Jack know that his brother died? Or thought his brother died? We don't know. It's mystery on mystery but the discovery of that comes pretty quick."

Lucky for you, everything about Jack and Nicky comes out sooner than later. "So next week, everything is going to be answered about Nicky," showrunner Isaac Aptaker told E! News. "We're going to tell exactly what happened with him and Jack, why Jack said he was dead when he wasn't, what everyone knew when... It's such a cool episode, and it has so many answers, and that's when people are going to be really satisfied." There you have it — all of your answers are on the way. Get the tissues ready because you know when Aptaker says it's a "cool" episode he really means you'll cry your eyes out.