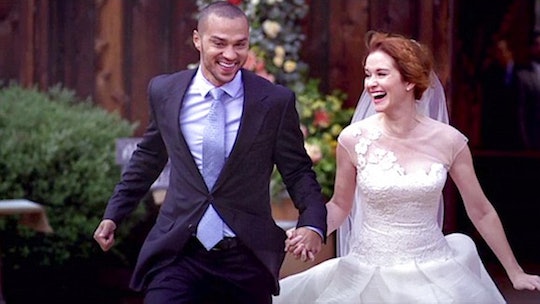 Why Did Jackson & April Break Up On 'Grey's Anatomy'? Their Grief Separated Them

With so much going on at Grey Sloan Memorial Hospital it's hard to keep up with everyone's relationship woes, which is why it wouldn't be surprising if you forgot why Jackson and April broke up on Grey's Anatomy. There were a lot of ups and downs in Jackson and April's relationship, so much so that we even got an episode dedicated just to them in Season 12 prior to their divorce. However, their relationship really started heading downhill after their son, Samuel, died and Jackson and April handled their grief very differently.

After the loss of Samuel, Jackson tried to be there for April. He tried to comfort her, to make her feel better, to do whatever she needed, but April didn't want to be treated like some fragile creature. She wanted to remember what it was like to be strong and to be doing something, which is why she decided to join Dr. Hunt when he left the hospital to work in a war zone. April was only supposed to be gone for three months but kept postponing her return, which hurt Jackson. Finally at the end of Season 11, Jackson gave April a choice. If she decided to do another tour with the army then when she came back he wouldn't be waiting for her like he had before. Despite the ultimatum, April decided to go anyway.

When April got back their relationship was still very rocky. They constantly went back and forth between sex and fighting, which wasn't healthy and finally culminated in them signing divorce papers. Of course, it was later revealed that April was pregnant, but rather than have Jackson stay with her for the sake of the baby, she chose not to tell him about the pregnancy. Now, though, it seems that the pregnancy, which led to their baby girl, Harriet, may be the very thing that brings them back together.

April and Harriet are currently living at Jackson's house and although at first it was because April was recovering from the emergency C-section during Harriet's birth, Jackson and April both agreed that April and Harriet should stay. How long this set up will last remains unclear, but this is the perfect set up for April and Jackson to rekindle their romance. Here's hoping "Japril" isn't over just yet.