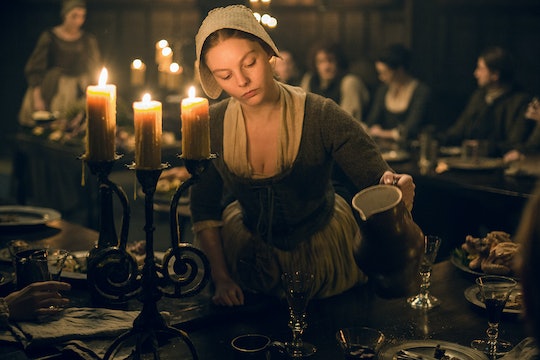 A Familiar Face Showed Up On 'Outlander' With A Shocking Revelation

It's possible to maybe commend Jamie for telling Claire about his son as soon as she got back to the 18th century. It's slightly less commendable that he failed to tell her he'd gotten married... to the woman who once tried to have Claire killed no less. This will undoubtedly lead people to wonder: why did Jamie marry Laoghaire on Outlander? She is causing huge problems for my favorite TV couple and I'm not very pleased with it. Neither, for that matter, is Claire. But Jamie did try to explain himself.

Boiling his explanation down to its simplest terms — it was the holidays. It seems like a pretty lame excuse to me, but hey, I guess everybody needs love at Christmas-time. Jamie explained that it was the first time he'd celebrated Hogmanay at Lallybroch since he was a child. Hogmanay in Scotland is New Year's and is still celebrated today starting before New Year's Eve and lasting until January 1 or 2. It's a bigger deal than Christmas in Scotland, and their biggest annual celebration. So while everyone was dancing and having a grand time, Jamie was off to the side feeling lonely and generally sorry for himself. That's when Laoghaire's daughters Marsali and Joan dragged him out to the dance floor and he actually had fun for the first time in a long time.

Jamie explains that this was the first time he'd actually laughed since Claire had gone away. Laoghaire's husband and the girls' father had died. So he saw a chance to be a husband and a father — to have a family basically — that he thought he'd never get the chance to have since Claire went away. Basically, he married Laoghaire because he liked her kids and was feeling alone. For what it's worth, the marriage didn't exactly work out because we all know that Laoghaire is the absolute worst.

In fairness to Laoghaire, it is understandable why she fell in love with Jamie Fraser. Literally everyone falls in love with Jamie wherever he goes. I mean, wouldn't you? But aside from Claire, Laoghaire is the only one who seems to think that he was destined by God to be hers. In an interview with Celebrity Cafe, Nell Hudson, who plays the character, explained a little bit how the two of them came to be together again after so much time. "I think that Jamie still has a tenderness for her, and I think Jamie’s definitely a hero to her," she said, adding, "and I know it’s through sort of not the right reasons, but they do end up together when it seems she [Claire] kind of has fallen off the radar."

It makes sense that the actor who played the part would feel a little bit more kindly toward the character trying to tear the lovers apart than the audience in general. But that's not going to change how I feel about her at all — especially considering her somewhat violent tendencies. Luckily, Laoghaire doesn't stand in the way for too long. The marriage is rather neatly considered invalid by the law, seeing as Jamie's first wife (that would be Claire) was still living when Jamie and Laoghaire got married. But then Laoghaire had to go and shoot Jamie by accident when she meant to shoot Claire. And so started a whole new set of problems for the couple.

In order to get rid of her for good, Claire and Jamie had to either legally punish her for shooting him — an outcome that would likely lead to her being sent to the colonies — or pay her alimony. They settled on alimony to keep her from being separated from her daughters, so it looks like she won't be around causing trouble for much longer. The real question, of course, is whether Claire will be able to get over the fact that Jamie married her to begin with.