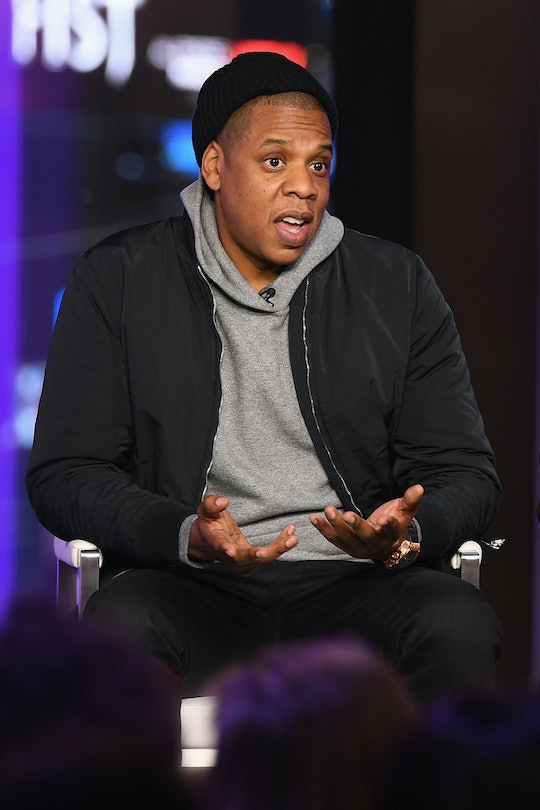 So, Jay Z Is Now JAY-Z & Everyone Is Shook

Not to be outdone by Beyoncé and the twins, Mr. Knowles-Carter just released some news of his own. Sure, it's not as earth shattering as two new Bey-bies, but the father of three certainly felt the need to share his most recent identity switch. Fans are wondering: Why did JAY-Z change his name? The rapper formerly known as "Jay Z" is now "JAY-Z" — yes, with a hyphen, and yes, in all caps. Is it meant to be shouted out? Only time will tell.

Looking back, JAY-Z's got a lot of nicknames and he's reinvented himself time and time again. Ever heard of "Hova?" Short for "J-Hova?" The moniker that sounds like (yep, you guessed it), "Jehovah?" That's just one of his personal iterations; "They call me J-Hova cause the flow is religious," he spits in "Rhyme No More."

But of course, he wasn't always a "Hova"; JAY-Z's birth name is Shawn Carter. Upon marrying the queen, he officially took Beyoncé's last name, thus becoming Shawn Knowles-Carter. Adding just a bit more confusion, JAY-Z's Twitter handle is a combo of his initials and underscores (@S_C), with his name listed as "Mr. Carter."

Before the capitalized JAY came out on Monday, he actually hadn't been "Jay Z" (sans hyphen) for very long; In 2013, JAY-Z dropped the hyphen upon the release of his album Magna Carta Holy Grail. Funnily enough, adding the hyphen back in is also centered around an album. Fans can finally hear 4:44, JAY-Z's latest project, on June 30, released under his new, capitalized, and properly punctuated name. Tidal spread the 4:44 news on Monday with a video clip featuring a boxing Mahershala Ali and a JAY-Z verse.

Sorry to make it about Beyoncé again, but seriously, JAY-Z? You can't release a statement about the new babies' names but you've got plenty of time to spread news about yours? We don't even know the sexes of the Knowles-Carter twins, but we've got a release date for 4:44? Talk about playing it close to the vest.

Without a statement from JAY (or Bey), the most secure babies-are-born confirmation came from Beyoncé's dad. Mathew Knowles's tweet was the first insider announcement that the twins had arrived. All we're asking, JAY-Z, is for a little bit of acknowledgement that you helped bring two new lives into the world! Though a tweet would suffice, we know that you and Bey prefer that things be a bit more extravagant; Beyoncé's iconic pregnancy announcement will be unmatched for decades to come.

Blue Ivy's first baby photos were shared just a month after her birth, so maybe there's hope that we'll see the twins in a bit. 4:44's release date is before then, however, so the next things you'll hear from JAY-Z will likely all be album-related. Sigh. Guess we've just gotta take what we can get.

More Like This
Elon Musk's Child Files To Change Name, No Longer Wants To Be "Related" To Father
Barack & Michelle Obama Shared The Most Adorable Baby Photos Of Malia On Her Birthday
Prince Charles Got All Mushy When He Met Lilibet For The First Time
Victoria Beckham Reflects On Being Forced To Weigh Herself On TV After Giving Birth