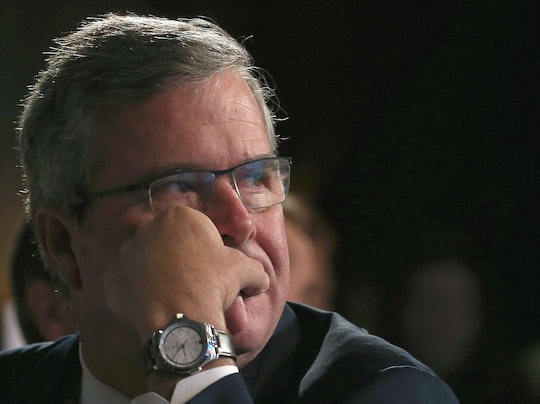 Why Did Jeb Bush Drop Out? A Presidential Legacy Comes To Lackluster End

It's amazing to believe that eight months ago — when former Florida Gov. Jeb Bush announced his campaign to run for president — he was quickly considered a GOP frontrunner, given his presidential family. For a few months, there was even speculation of yet another "Bush v. Clinton" battle for the White House (this time against former Secretary of State Hillary Clinton). But after Saturday's disappointing fourth place finish in the South Carolina GOP primary — after several disappointing finishes on the primary trail — he did the only thing he could at this point: Jeb Bush dropped out. And honestly, it's not all that hard to see why.

To date, the New Hampshire GOP primary on Feb. 9 has been Bush's strongest showing, coming in fourth place with 11 percent of the vote. It was certainly better than his showing in the Iowa caucuses on Feb. 1, when Bush couldn't even crack 3 percent of the polls in a poor start to his campaign. Bush hadn't even made 8 percent of the vote in South Carolina on Saturday, landing uncomfortably again in fourth place. Less than two hours after the polls closed, Bush made the difficult announcement to a group of supporters that he was suspending his campaign, in a clearly emotional speech:

It's hard not to feel bad for the man: Bush has come from a legacy of presidents. His father, George H. W. Bush, was the 41st President of the United States. His brother, George W. Bush, served two terms as the 43rd president. But in 2017, there won't be another Bush in the White House as the 45th president. In his June 2015 presidential campaign announcement, Bush made a rather astute — and eerily prescient — observation while addressing the notion of possible dynastic control of the White House if a third Bush were to become president:

“Not a one of us deserves the job by right of résumé, party, seniority, family or family narrative. It’s nobody’s turn. It’s everybody’s test.”

On Saturday, it was apparent that Bush failed that test, at least in the eyes of voters. Perhaps the most frustrating part of that test in the GOP race so far — especially in the eyes of the Bush campaign — is the baffling rise of real estate and media mogul Donald Trump. The former host of The Apprentice has actually become a serious contender for the Republican nomination, over the man who has eight years of experience as the former governor of Florida. Bush's reputation had suffered near continuous brutal backbiting by Trump, especially on social media — often calling Bush "weak" and "low-energy."

While Trump's tweets about Bush are more bullying than campaigning, Trump's mischaracterizations continued to dog Bush on the campaign trail. Calling Bush "weak" and "low-energy" was grabbing at low-hanging fruit, as Bush only seemed so subdued when compared to Trump's unfiltered brashness: It was a cheap shot. But it was a cheap shot that stuck, one that Bush simply couldn't climb back from by the time the primaries began.

Bush's campaign had also suffered from other gaffes along the way, besides disastrous performances at the polls. In November 2015, Bush relaunched his campaign with the new slogan "Jeb Can Fix It!" Unfortunately for Bush, it also happened to mirror the name of a long-running BBC television show, Jim'll Fix It! — hosted by Jimmy Savile, who is quite possibly, one of England's most prolific pedophiles. (Savile died in 2011 and his 400-plus crimes were revealed posthumously.)

In early February, Bush awkwardly begged a gathered audience of supporters at a New Hampshire campaign event to clap for him:

And then on Feb. 10, Bush was actually kicked off the stage at a Rotary Club luncheon in Nashua, New Hampshire, when his speaking time had expired:

It's been almost painful to watch an otherwise accomplished, dedicated public servant — who comes from a family of presidents — get crowded out of the presidential race by a clown car of GOP candidates. And even though the GOP field has shrunk substantially, Bush never truly found a way to rise to the top of what was left and continued to tumble towards the inevitable conclusion: he had no choice but to drop out of the race after South Carolina.

But when you really look at the legacy of what had come before him and what could have been — it shouldn't have ended like this. Bush never compromised his campaign by becoming some kind of freak show barker for the sake of keeping up with the circus the GOP race has become.

I can say with confidence, even as a card-carrying Democrat: Jeb Bush deserved better than this. And we all deserve better than what this breakneck sprint to the White House has devolved into: a race to the bottom of the barrel.