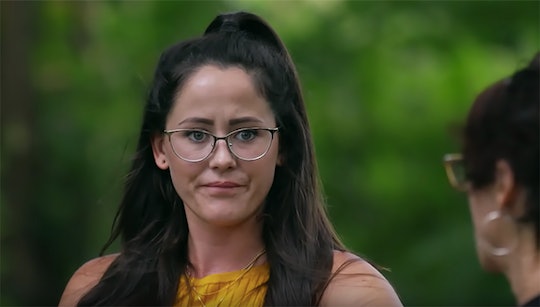 In Monday's episode of Teen Mom 2, there's footage of Jenelle burning hair care products Kailyn had sent her in the mail. It's an odd moment, to say the least, and now some fans want to know why Jenelle lit Kailyn's gift on fire. It's a fair question, right?

Once upon a time, Kailyn and Jenelle were pretty close. Case in point: In 2011, Kailyn reportedly lent her co-star $150 after she was arrested for an alleged probation violation, so she could make bail, according to Hollywood Life. The two maintained remained friendly for years, but things became tense after Jenelle got together with her now husband, David Eason. Kailyn openly disagreed with David's anti-LGBTQ views, and she expressed concern for Jenelle's well-being. The mom-of-three said she wouldn't interact with the couple at the TM2 reunion in January 2019 because she was afraid of David, stating, according to Us Weekly: “I will not be attending any type of reunion on the same day or weekend as Jenelle & David for the same reasons."

Jenelle didn't appreciate the comment, complaining to Us Weekly: “Why did she have to reply to that publicly and talk about us again? I don’t like the person she is … You can never really trust her.”

Despite their differences, Kailyn decided to send Jenelle a sample of her new hair care line, Pothead Hair Care. "I’m going to send them to the whole cast," Kailyn said in a preview clip for Monday's episode. "Jenelle will probably use her for target practice … I’m still going to send one."

Although Kailyn didn't have high hopes for the gesture, she probably didn't anticipate that Jenelle would set the package on fire. Holy moly.

The footage of Jenelle going pyro on Kailyn's olive branch aired in Monday's episode, but there are screenshots of the incident floating around on Twitter. The pics show an Uggs-clad Jenelle standing next to a raging bonfire in the woods, which was a dramatic move, to say the least.

Kailyn didn't have much to say about the incident, tweeting: "Jenelle set my peace offering gift on fire."

What more can you say, I guess.

As for Jenelle? She went on a long rant about why she decided to trash Kailyn's hair care products, writing in the December 2018 post: "Been debating whether to upload this, but I feel like the time is appropriate. Kail Lowry , for years you’ve been super jealous and envious of all us girls on the show. You try to make your way into the group, then turn into a mean a** person when it came down to me."

She continued: "You apologize on/off, claim I need to be apologizing sometimes, then talk sh*t constantly about me and my husband to the tabloids?! THEN you had the balls to send me a PEACE GATHERING GIFT?!"

The message concluded: "Don’t send me gifts and then go talk sh*t AGAIN!!! Wow, you’re an idiot cuz this is what I do for gifts sent from fake ass b**hes like you. Stay our of my life, go worry about your own."

Kailyn's ex-husband, Javi, argued that Kailyn shouldn't have sent the gift in the first place. “You’re both saying stuff, I don’t know why you would send a gift and expect a thank you,” Javi reasoned to In Touch Weekly.