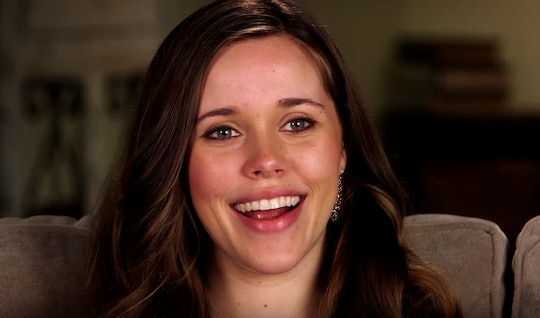 Naming a baby seems like a pretty straightforward task, but there are so many different variables to take into consideration. Of course, you have to pick a name that both you and your partner (if you have one) agree on. But you also have to figure out if the first name "fits" with the second, whether the initials spell something embarrassing/inappropriate, or whether you want to stick with a family name. So the Counting On fans wondering why Jessa Duggar named her daughter Ivy probably know that this decision wasn't an easy one.

In case you missed the big news, Jessa and Ben Seewald welcomed their third child on May 26, according to People. (They're also parents to Spurgeon, 3, and Henry, 2.) At the time, Ben and Jessa announced they had named their baby girl Ivy Jane. However, they didn't offer any insight into how they arrived at this decision. “She feels so tiny compared to her siblings!” they told Us Weekly, of their newborn — who weighed in at 7 pounds, 14 ounces. “We’re so grateful to God for this precious gift. She is already so loved. Her big brothers adore her!”

On Monday, June 3, Jessa took to Instagram to share a link to a video explaining why they chose the name "Ivy Jane" for their baby girl.

"We just liked those two names," Ben said, as the third-time parents sat together with their newborn. "Jessa and I talked about it this time around, and we actually had a name picked out before she was born. We liked the way those names flowed together." The proud father went on to explain:

And with her middle name, Jane, she's actually named after Lady Jane Grey, who was a young lady who was queen of England for a short time during the 1500s. She was a very inspirational character for us.

In the same video, Jessa also shared a few details about how her labor and delivery went. "I am feeling great after this birth. It was very quick," she said of her third home birth. "My water broke at 8:30 in the morning, but I didn't have any contractions until 2:30 in the afternoon. And then she was born at 6 O'Clock. So really, just 3-and-a-half hours of labor." Jessa added that bows, ruffles, lace, and pink are a few exciting things about having a girl this time around.

As for big brothers Spurgeon and Henry? They seem to be smitten with the family's newest addition. "We're going to have to teach them how to be more gentle, though," Ben said. "Because they're pretty rough."

Personally, I'm loving the name "Ivy Jane." I know the Seewalds got some side-eyes after their first child was born. "Spurgeon" is a pretty unique name, after all. It turns out, Spurgeon Elliot was named after two missionaries they respected. The same line of thinking went into their second son's name, Henry Wilberforce — who was a British politician in the 1700s that helped abolish slave trade.

To be honest, parents don't really need to have a reason for the name they chose for their baby. (You know, other than that they like that name.) But it's still neat to hear about the thought process that went into it. Congrats again to Ben and Jessa on their precious baby girl!