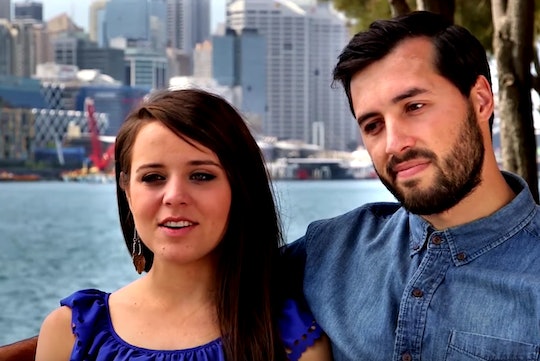 Since Jinger Duggar gave birth on July 19, there are so many things fans have been dying to know about her daughter. Although fans are pretty sure that they'll see a lot of Duggar's pregnancy and labor play out on camera on her family's reality show, Counting On, it's a little unclear when that might happen. So, it's understandable why some fans might want to know, for example, why Jinger Duggar named her daughter Felicity and if there's any special meaning behind it.

The great news is, Duggar released that exact information (and some super cute photos of Felicity and the family) in a brand new interview with Us Weekly. Although the name Felicity might conjure up images of American Girl dolls or remind people of the late 90s TV show, Felicity, Duggar revealed in the new interview that there was no specific person or thing that inspired her daughter's name.

Sometimes, a baby's name can be determined by a mother's intuition, and that's exactly what Duggar credited when it came to picking out Felicity's name, telling Us Weekly that the name "just felt right." And it was all because she and her husband, Jeremy Vuolo, "loved the name Felicity from the moment we thought of it several months ago."

And once Duggar and Vuolo found out about the meaning behind the name, they were even happier with their decision to pick the name Felicity for their daughter. Duggar told Us Weekly:

The name itself means intense happiness or supreme joy. It was also the name of a young Christian girl long ago who valiantly stood strong for her faith.

Considering that Vuolo is a pastor in their current town, Laredo, Texas, and Duggar was raised to be very religious, it makes sense that they would name their daughter after someone who is symbolic to their faith.

Duggar is right about the meaning behind Felicity's name. The name Felicity, has a Latin origin and means "happy," according to BabyCenter, and means "good fortune," according to NameBerry. Having Felicity in their lives is the best fortune for Duggar and Vuolo, and will bring them happiness for the rest of their lives. So, it was kind of perfect that they chose this name for their daughter.

Duggar isn't the first of her siblings to choose a symbolic and religious name for their newborn babies. Jill Duggar named her firstborn son Israel, because she and her family took a trip to the Holy Land in 2011, according to People, and means "wrestled with God" in Hebrew. Jessa Duggar, named her firstborn son Spurgeon, after the British preacher, Charles Spurgeon, who preached in the 1800s and had a profound impact on her (and her husband's) life, according to ABC News. "His writings and sermons and books are still around to this day," Ben Seewald, Jessa's husband, said after his son's birth. "They just continued to impact many, many people."

So, it isn't out of the ordinary for Jinger to pick a name with religious roots. But, the name Felicity is a little unique, if only because Jinger gave birth to the only female Duggar grandchild to be born this year, according to TLC.

Of course, like any parent, picking the right name for her daughter was so important to Jinger — and knowing the meaning behind her daughter's name is super special for fans. But, what's even more special is knowing that Jinger cannot get enough of her little girl and is so happy to be a mom. "It's been so incredible," Jinger told Us Weekly. "We can't stop staring at her adorable little face!"

Their newborn daughter and her name are both couldn't be sweeter.