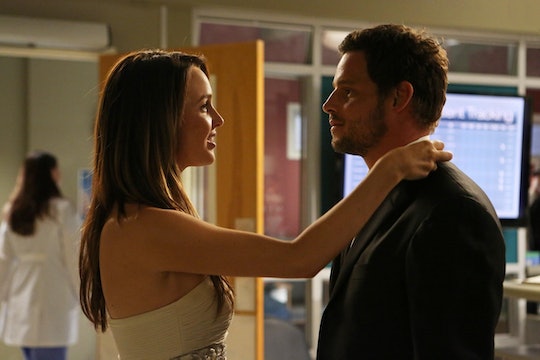 Why Did Jo & Alex Break Up On 'Grey's Anatomy'? They Weren't On The Same Page

For the past four seasons of Grey's Anatomy we've watched Jo and Alex date, break-up, and get back together. We sadly watched as Alex proposed to Jo twice and she turned him down each time, saying she just wasn't ready. On Thursday's episode of Grey's Anatomy, Alex breaks up with Jo after deciding he can no longer wait anymore. He doesn't need to marry Jo tomorrow or the next day, but he needs to know that they will, at some point, finally get married. Besides, third time is the charm, right?

Unfortunately, not in this case. Alex tells Jo that he wants to marry her and that he can't wait for an answer any longer. After hearing Alex out, it seems like Jo considers saying yes but ultimately says that she can't. Alex tries to convince Jo that she can marry him, that he doesn't need anything big but she still says no, thus breaking all the Jolex shippers' hearts.

Watching Jo and Alex's relationship is somewhat reminiscent of Cristina and Owen's tumultuous relationship. Jo was always scared to commit to Alex and even hesitated moving in with him. When Alex first proposed she told him she wasn't ready yet, but the truth seems to be that she doesn't want to get married at all. Possibly Jo felt that because she loves Alex and wanted to make things work with him if she just gave herself more time she'd eventually change her mind about marriage.

Similarly, Cristina always knew she didn't want kids, while Owen definitely wanted kids. Although Owen said he was OK not having kids, it continued to be a point of issue in their relationship, especially when Cristina becomes pregnant and decides to get an abortion. It was this argument that led to Owen cheating on her and ultimately the end of their marriage. Just as Owen tried to change what he truly wanted so he could be with Cristina, Jo also tried to change who she was so she could stay with Alex.

The connections between the two couples become clear when at the end of the episode it is actually Owen and Amelia, who wants a house and kids with Owen, that get engaged. Owen has found someone with his same views on marriage and family, whereas Jo and Alex have not. Although the Jolex relationship was very cute, it's not all that surprising that it's come to an end.