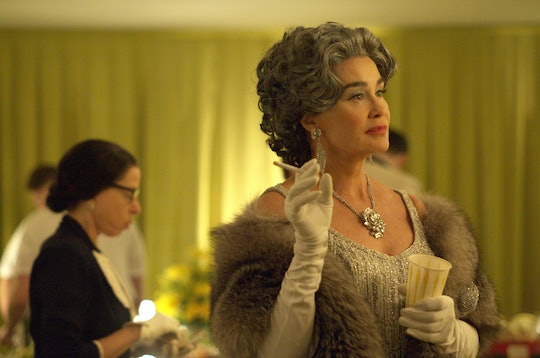 In Feud Season 1 Episode 5, "And the Winner Is... (The Oscars of 1963)," the rivalry between Joan Crawford and Bette Davis came to a head at the Academy Awards. After the contentious filming of What Ever Happened to Baby Jane?, Joan was snubbed by the Oscars while Bette got a Best Actress nomination. This led to Joan doing everything she could to ruin the ceremony for Bette, up to and including accepting an award she wasn't even nominated for. But why did Joan Crawford accept the 1963 Oscar for Best Actress?

Joan appeared to have a few different motivations, but they all came from the same place of hurt and jealousy. She felt that she truly deserved to be recognized for her work in Baby Jane. For Bette to get all the acclaim instead highlighted one of the major issues in their relationship: the ever-glamorous Joan never got the respect she craved for her work and talent, instead being singled out for her sex appeal. Bette, however, was always honored for her talent. When it came time for the 1963 Oscars, Joan was once again overlooked for her work while Bette raked in the praise.

Joan decided to sabotage Bette out of spite. Her pain and envy caused her to lash out in a way that would really hit Bette where it hurt. By accepting the Best Actress Oscar, Joan wounded Bette in a calculated, very personal way.

Joan's plotting against Bette was aided by gossip columnist Hedda Hopper, who was as much a fan of Bette as Joan was. They joined forces to keep Bette from winning the Best Actress Oscar with a twofold approach: Hedda would badmouth Bette around town and Joan would talk up the other nominees. By doing so, they could sway just enough of the voters to cast their ballot for someone else, robbing Bette of the award everyone thought she would win.

But that wasn't enough for Joan. Not only did she want to keep Bette from winning, she also wanted to steal the moment from her completely. To accomplish that, she went around to all the other nominees and offered to accept the Oscar in their stead if they could not attend the show. Then, when Anne Bancroft won Best Actress for The Miracle Worker (she couldn't go to the ceremony because she was starring in a Broadway play at the time), Joan went up on stage to accept on Anne's behalf while Bette watched from the wings, devastated.

Joan wanted to hurt Bette, but she also wanted the glory for herself. By accepting the award, she got all the attention and got to stand amongst the other winners for photographs, clutching an Oscar. But the award wasn't really hers. She may have stolen Bette's moment, but Joan didn't really get much in return.