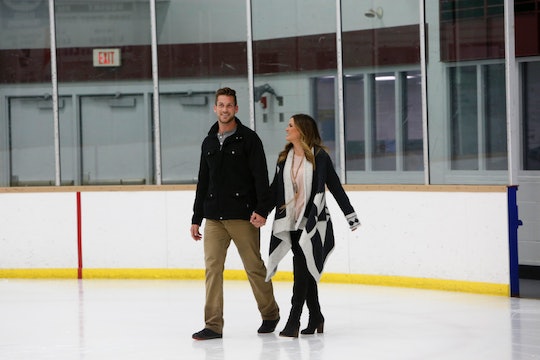 Why Did JoJo Send Chase Home On ‘The Bachelorette’? It Was A Complete Blindside

If JoJo's fantasy suites episode of The Bachelorette is teaching us anything, it's that telling this woman you're in love with her too late in the game is the kiss of death. And why did JoJo send Chase home on The Bachelorette? The very same reason Luke got sent home at the top of the episode.

Luke had just gotten dumped because he failed to drop the L-bomb during hometown visits, when he had the perfect chance (and the perfect gesture) to do it. He waited until the verge of rose ceremony beginning to pull JoJo aside and spill his guts, but it wasn't enough to deter her from the decision to send him home.

Then, right after inviting Chase into their fantasy suite, JoJo also heard "I love you" from him. He had definitely been warmer, more playful, and more open with JoJo on the Thailand trip. But something about his declaration still felt unsatisfying to her. She excused herself from the suite and went to sit outside for a moment to collect herself.

"I know that I'm crazy about Chase and I care for him," JoJo said in a cutaway interview. "But I know where my heart stands in those relationships that I have with Robby and that I have with Jordan."

"I think that my relationship with Chase is maybe just a little bit behind," she added. "Our relationship just isn't where it needs to be."

But breaking the news to Chase wasn't easy. He had just said "I love you" to a woman first for the first time in his life, and he was not expecting to get dumped right after being invited into the fantasy suite. Chase had a complete meltdown, fuming with anger and heavily guilt-tripping JoJo for sending him home after he "put [him]self out there." (Chase is apparently unaware that everyone "puts themselves out there" in relationships and that succeeding at being bravely vulnerable does not guarantee you some sort of happiness reward.)

He was snarky and even a little mean, cracking cruel jokes and bitterly saying in the car that he never should have told JoJo he loved her.

Needless to say, the winner of JoJo's most graceless breakup was definitely Chase, and that's saying a lot for a guy who shared a season with Chad. But he did reappear mid-rose ceremony to pull JoJo aside — just like Luke — only this time, it was to apologize for his behavior. Chase admitted that he had acted out of shock the night before and reassured JoJo that he cared for her and wasn't mad at her for dumping him. He even slipped in an assurance that if she ever wanted to try things again "down the road," his "heart would be open." So ultimately, Chase managed to redeem himself a little bit for the night before.