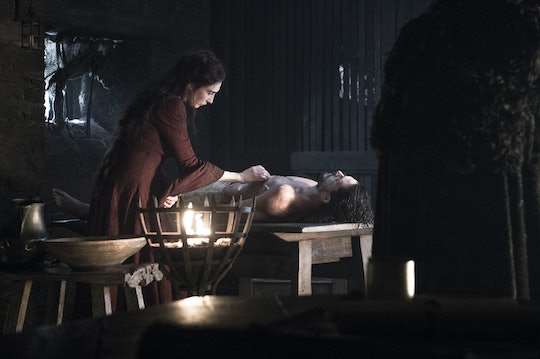 Why Did Jon Snow Leave The Night's Watch On 'Game Of Thrones'? His Vow Is Over

Season 6, Episode 2 of Game of Thrones came with the moment we've all been waiting for. Jon Snow was resurrected by Melisandre and the rest was history. OK, just kidding. The rest was not history, in fact, the rest was only beginning. On Sunday's episode, Jon Snow began the next step of his life, which involved leaving the Night's Watch. But, since the that's kind of a big deal on Game of Thrones, why did Jon Snow leave the Night's Watch, and more importantly, why was he able to? Well, it all traces back to the vow he took.

As it stands, the Night's Watch oath is follows:

Night gathers, and now my watch begins. It shall not end until my death. I shall take no wife, hold no lands, father no children. I shall wear no crowns and win no glory. I shall live and die at my post. I am the sword in the darkness. I am the watcher on the walls. I am the shield that guards the realms of men. I pledge my life and honor to the Night's Watch, for this night and all the nights to come.

Note the important word usage in that second sentence. The vow of dedicating ones life to the Night's Watch is "until death." Well, I hate to bring it up again, but Jon Snow did die. Therefore, the oath he took was dissolved upon his death. Nowhere does the oath say, "Night gathers, and now my watch begins. It shall not end until my death — unless Melisandre or someone else magical brings me back to life after a little boy stabs me and I'm laying on a table where my dire wolf lays close by. In that case, I'm back to work."

Because of this little flaw in rhetoric, Jon Snow is no longer required to return to the Night's Watch. After executing those who turned on him, including Olly, Jon said goodbye to his post and that was it. Again, I kid. This is just the beginning.

But what does Jon have in store for his future? Will he reunite with Sam, or will he save Rickon, who had a rather unfortunate run-in with Ramsay Bolton? Also, will Jon Snow be revealed to be the Prince That Was Promised? Melisandre certainly hinted at that when she saw that her magical words/haircut worked.

This is just the beginning of the new Jon Snow, so watch out.