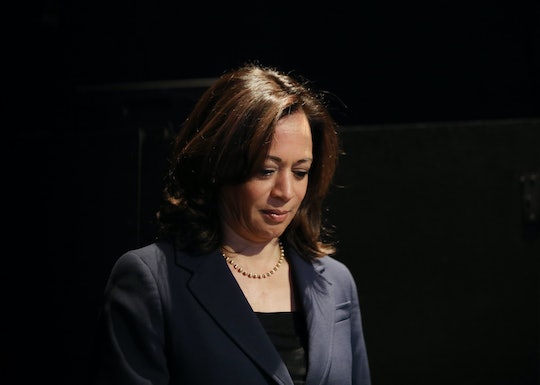 Nearly one year after launching her campaign, Sen. Kamala Harris has dropped out of the 2020 presidential election. The California senator announced plans to end her bid for the White House immediately on Tuesday. But why has Kamala Harris dropped from the presidential race? Turns out, it's more a matter of financial resources than will to fight.

"My campaign for president simply doesn't have the financial resources we need to continue," Harris said in a lengthy statement published on Medium. "I'm not a billionaire. I can't fund my own campaign. And as the campaign has gone on, it's become harder and harder to raise the money we need to compete"

While Harris has been at the middle of more than one memorable campaign moment — such as her confrontation of Joe Biden during the first Democratic debate — it appears she's failed to turn those moments of publicity into major financial donations or even significant voter support. Recent 2020 polls have shown Harris with a national average of just 3.4%, according to Real Clear Politics.

The California senator and now former 2020 presidential candidate said she was suspending her campaign "with deep regret" and "also with deep gratitude." Harris went on to say that although she remained committed to continuing to fight for the issues central to her campaign, she could no longer see a path forward.

"In good faith, I can't tell you, my supporters and volunteers, that I have a path forward if I don't believe I do," she wrote. "But I want to be clear with you: I am still very much in this fight. And I will keep fighting every day for what this campaign has been about. Justice for The People. All the people."

Although ending her campaign for the Democratic presidential nomination, Harris vowed to keep fighting for adequate teacher pay as well as an end to gun violence and state-level anti-abortion laws. She also vowed to continue to highlight the unique experiences of Black women and people as well as "their importance to the success and future of" the Democratic Party.

Last, but not least, Harris said she remained committed to seeing President Donald Trump replaced in 2020. "I want to be clear: although I am no longer running for President, I will do everything in my power to defeat Donald Trump and fight for the future of our country and the best of who we are," Harris wrote.

While the California senator didn't endorse any of her former Democratic competitors, a number of them were quick to express their willingness to keep fighting alongside her. "Kamala is right — our system is deeply broken when billionaires can buy their way in," Sen. Elizabeth Warren tweeted Tuesday in response to Harris' statement. "I'll fight with you to make sure our government works for all of us."

Sen. Bernie Sanders echoed a similar message in a tweet to Harris. "Thank you @KamalaHarris for running a spirited and issue-oriented campaign," he wrote. "I look forward to working with you to defeat the most dangerous president in history and ending the hatred and divisiveness that he has created."

On Tuesday, Harris took a moment to thank all those who helped make her campaign possible, including her husband Douglas Emhoff, who tweeted a short but sweet message of support for her Tuesday. Noting that her presidential bid "has been so much bigger than me," Harris also extended deep gratitude to all of her campaign staffers, supporters, and volunteers. "It has been the honor of my life to be your candidate," she wrote.