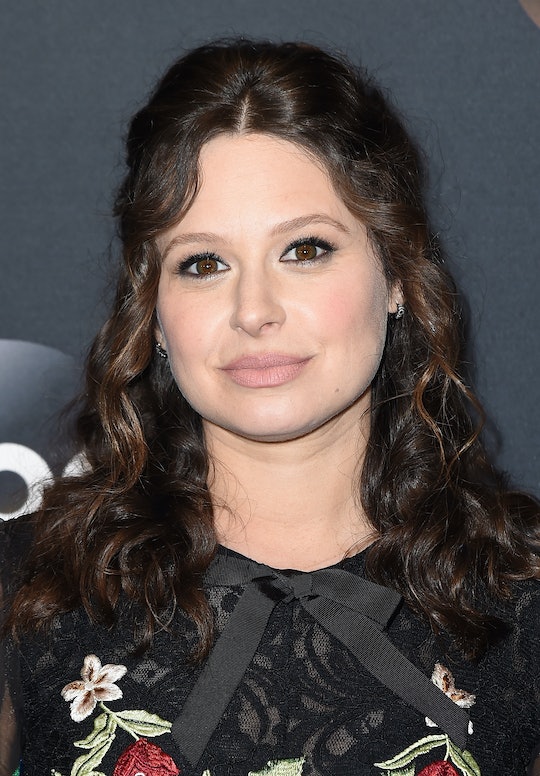 For Those Wondering Why Katie Lowes Left 'Scandal' — Here's Your Answer

Scandal is in its final season, and while we're all hurtling through space and time trying to tie up loose ends at the White House, at OPA, and within the tumultuous microcosm of Olitz, there have definitely been some confusing plot resolutions. For one thing, it seems like Quinn Perkins, the very first gladiator we saw recruited in the very first episode, has officially been killed off. So why did Katie Lowes leave Scandal? There are a few reasonable explanations, but none of them justify the terrible way her character exited the show.

Lowes was already on maternity leave after giving birth to her son Albee this past October. It seems like she simply opted not to spend more time away from her baby in order to come back and shoot the last few episodes after this season's hiatus. The midseason finale saw her character Quinn get kidnapped on her wedding day, and although Lowes would have had a few weeks off between the show taking a break and the search for her character when it returned, it seems like she decided to bow out while she still had an opening to be written off for good. When Olivia realized that it was Rowan who had kidnapped Quinn, she called for a hit on him. He pulled his gun on Olivia, but she called his bluff, and after a tense stand-off, he walked away and we heard a shot fired, followed by a woman's scream.

Fueling speculation over whether Quinn is really dead or not is the fact that we never saw her body. All we saw were the charred remains of a woman after Rowan has disposed of her, which the gladiators decided to cremate and fashion into bullets in honor of one of Quinn's favorite assassins. As we all know, in Shondaland, no one is dead until we see a body. But in this case, it seems like Quinn really is gone for good, based on the final tone of her funeral episode, which contained In Memoriam flashbacks from every remaining gladiator, as well as the farewell tweets we've seen from Lowes and showrunner Shonda Rhimes.

The one speck of hope we've been given is the discovery of a baby girl in Rowan's house, whom Charlie found when he tried to get reinstated as a member of B613. He showed up on Rowan's doorstep begging to return to life as a highly trained assassin after the death of his fiancée and the loss of his family-to-be. He's obviously devastated and dealing with his grief as only a colleague of Olivia Pope's would: by stuffing his feelings down and getting back to work ASAP. Rowan told him to take some time, but Charlie wouldn't take no for an answer, and that's when he heard a baby crying somewhere in the house. He barged in and found her, immediately started piecing things together, and wound up trying to strangle Rowan in a cliffhanger episode ending.

Of course, most of OPA, including Charlie, don't know the extent of Olivia's involvement in Quinn's death. Huck is beginning to suspect her, but Olivia's newfound ruthlessness as the new Command is causing her to act wildly out of character. It's part of why Quinn's death is so hard for fans to swallow — it's super difficult to believe Olivia would really let a hugely pregnant Quinn die, even if she was calling her father's bluff, or doing what she needed to do for "the Republic." But it feels unlikely, based on the way everyone is treating Lowes' exit, that we'll ever see Quinn again.