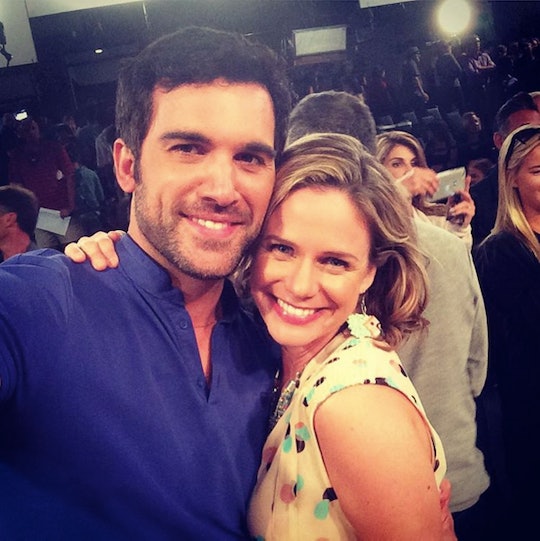 Why Did Kimmy & Fernando Break Up On 'Fuller House'? For One Damn Good Reason

When fans of Full House last saw Kimmy Gibbler, she was donning a light-up dress that would only be acceptable at the MTV Video Music Awards. But when the world's most beloved neighbor returns in Fuller House, viewers will pleased to see that. . . well, not much has changed. Kimmy's still kooky, candid, and downright hilarious. The only difference is she now has a tween daughter, Ramona, and a Rico Suave-like ex-husband, Fernando. Emphasis on the EX part. When you first hear of her divorce, you may wonder why Kimmy and Fernando break up. And, lucky for you, you don't have to wait too long to find out.

On the surface, these two seem like an odd pairing. Fernando rocks a traditional look of khakis and polos, while Kimmy wears bacon scarves and donut purses. But, as we've all be taught, there's more to a person than what meets the eye. Viewers quickly learn that Fernando has the same obsessive and eccentric personality as Kimmy. And, upon further viewing, we learn that the two have quite the sex life. In fact, Fernando brags to a roomful of people that Kimmy knows "long lost secrets of the Karma Sutra from deepest, darkest, India."

So the two share personality traits that many would find off-putting and they have some serious chemistry between the sheets. What could possibly cause them to break up?

Although Kimmy is what Ludacris would refer to as a, "freak in the bed," Fernando wasn't entirely satisfied at home. And, to make matters worse, he cheated on our beloved Kimym more than once. While at a going away party for Danny, several people quesiton Fernando's relationship with Kimmy. Fernando begins to brag that he has "seduced the most beautiful women in the world. To which Kimmy responds, "yeah, some of them during our marriage." As Stephanie Tanner would say, how rude!

So are the two done for good? Well, we're not entirely sure. As Fernando emphasizes many times in the pilot, he and Kimmy are temporarily separated — not divorced. And he seems to be doing everything in his power to win her back. But only time will tell if he's successful in this endeavor.