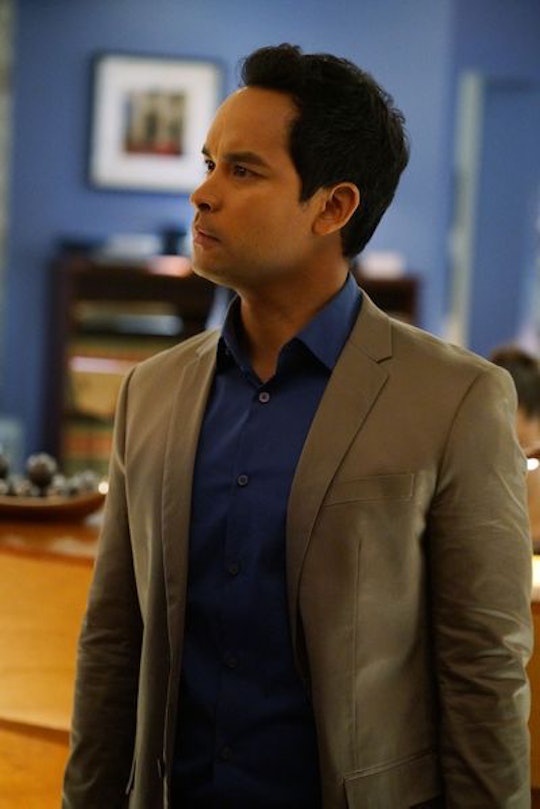 Why Did Levi Kill Himself On 'Notorious'? He Had A Lot Of Reasons

ABC's new drama, Notorious, is only four episodes in and a lot has already happened. It all began with the murder of Sarah Keaton, then Julia started getting anonymous tips from someone revealing not only that Jake and Sarah had an affair just prior to her death, but also that Sarah's husband, Oscar, was physically abusive to Sarah in the past. After that things started spiraling out of control and it turned out that Oscar's best friend and business partner, Levi, was the one who sent Julia those tips and had actually catfished Oscar. All of this culminated in Levi killing himself on Notorious, but why did he do it? Well, he had his reasons.

Thanks to Ryan, all of Levi's secrets were revealed. By looking at the postage stamp that was used to send Julia those incriminating photos of the Keatons, Ryan was able to figure out it was Levi sending those photos all along. When Julia confronted Levi about the photos he claimed that he wasn't trying to sabotage Oscar, but he also didn't provide a good reason for why he did it. Julia offered to let him come on the show to tell his side of the story and then threatened if he didn't she would tell the story anyway. However, Levi then threatened her right back that if she did that he'd tell the world about Jake's affair with Sarah. Needless to say, the argument was dropped, but that wasn't the end for Levi.

By hacking Levi's files, Ryan and Ella discovered that Levi was also "Vicki," the woman Oscar thought he was having an online relationship with. When it came out that Levi was catfishing Oscar, Jake put Oscar on Louise Herrick Live! so he could incriminate Levi and tell the world what he did. Of course, Levi didn't take this well, which may have been what pushed him over the edge. After confronting Jake and not really getting any response from him, Levi then turned his sights on Julia and told her to meet him at his house so he could tell her everything. It was there that Julia figured out the missing piece of the puzzle: Levi did everything he did because he was in love with Oscar. But Levi knew his friend would never see him that way, so he kept his feelings buried deep inside and used "Vicki" as a way to be close to Oscar so that at least he'd have some kind of intimate relationship with him. Even though this was still a bad thing to do, it did make Levi a little more sympathetic... until he pulled out a gun, that is.

At first it seemed like he might shoot Julia, but in the end he turned around, put the gun in his mouth, and pulled the trigger — but not before he told Julia to tell Oscar he was sorry. Although it seems pretty clear that Levi decided to end his life because of his unrequited love for Oscar, one also has to wonder if maybe he was feeling guilty because he also killed Sarah. However, Levi had to buy a gun to kill himself, which means he didn't have one before when Sarah was killed, so it seems unlikely that he killed Sarah. But if it wasn't Levi, who was it?

Keep tuning in to Notorious on Thursdays at 9 p.m. EST on ABC to find out.