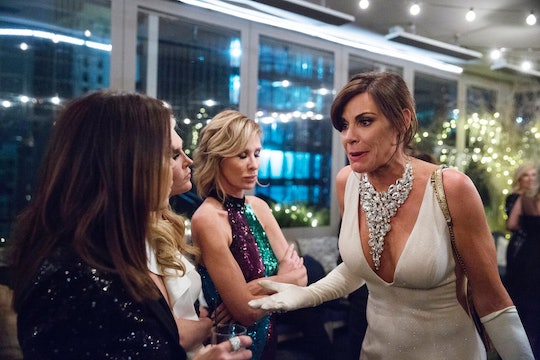 Luann Returns To Rehab After 'RHONY'

The Real Housewives of New York City is in the middle of its three-part reunion for Season 10, but one cast member is noticeably absent from the couch. Luann de Lesseps opted not to appear for the reunion, choosing instead to go to treatment just ahead of taping. So fans may be wondering: why did Luann go back to rehab after RHONY? She seemed to be doing so well.

Luann did appear to be maintaining her sobriety after returning from her first stint in treatment last January. She first checked herself in following an arrest in Palm Beach that led to felony charges, and ultimately decided that it would be a good idea to quit drinking for awhile. Luann looked great for the rest of the season, pulling off her cabaret show with great success and abstaining from alcohol throughout a boozy group trip to Caragena. But a legal case brought against her, this time by her own family, appears to have triggered her struggles severely enough that she decided to check back into rehab.

Days before she checked in, her ex-husband Count Alexandre de Lesseps, along with her children Victoria and Noel, filed a lawsuit against Luann alleging that she misappropriated funds from the sale of the couple's Hamptons home. Their 2009 divorce settlement stipulated that, following the sale, Luann would set up a trust for the children and put half the money from the house into it. But court documents claim she never did that and instead kept the money for herself.

Luann didn't personally speak out before going back into treatment, but she did give a statement to Bethenny Frankel to release. According to People, Bethenny said:

This weekend, Luann was surrounded by her girlfriends and decided — with their support — that in light of recent circumstances, it is the healthiest choice for her not to attend Tuesday’s reunion taping so that she can continue in her healing process. Luann is now surrounded by a core group of people who truly have her best interests at heart and who are working to make sure she gets the help she needs. Bravo has been very supportive of Luann during this time. It’s a brave and honest decision by her, and everyone is rallying around her and wants the best for her.

Bravo followed up with a statement saying:

Bravo supports Luann’s decision to focus on her health. She is part of the Bravo family and we continue to stand by her as she copes with this challenging situation. At this time, we hope everyone will respect her privacy.

And, from Andy Cohen's delicate handling of her absence on part one of the reunion, it seems like they're genuinely respecting her space right now. In a clip from part two of the reunion show, Bethenny insists that Luann "wanted to be here" and Dorinda cracks a joke about doing a special reunion show just for her when she returns. I'm sure that we'll get to hear more from Luann's side of the story soon — it just won't be this season.