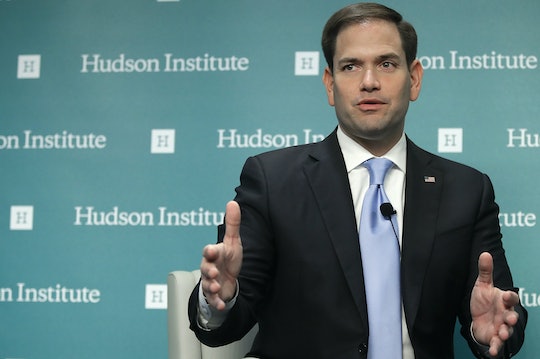 Why Did Marco Rubio Endorse Donald Trump? Their Relationship Is Pretty Awful

Well, in yet another confirmation that principles in politics are on the decline, "leightweight chocker" Marco Rubio just endorsed "con artist" Donald Trump. The Florida senator and the former reality TV star had a particularly contentious relationship as they both vied for the Republican presidential nomination. But now that Trump has it all sewn up, "Little Marco" is hopping on the bandwagon, albeit unenthusiastically. Those looking for answers as to why Marco Rubio endorsed Donald Trump probably won't find anything high-minded, just politics as usual.

In an interview with CNN's Jake Tapper, Rubio said that he would be "honored" to speak for Trump at the Republican National Convention, and that he would be releasing his delegates to support the man he once called "the most vulgar person to ever aspire to the presidency." In that same CNN interview, Rubio said, "I want to be helpful. I don’t want to be harmful, because I don’t want Hillary Clinton to be president." He even praised Trump as "the ultimate change agent." It was a dizzying about-face, coming only a couple of months after he dropped out of the primary, while all his negative comments about Trump are still fresh in the minds of voters.

However, Rubio has made it clear that he is not exactly thrilled about supporting Trump, and that he is doing it only because he sees him as the lesser of two evils:

Trump, for his part, is showing a similar erasing of the past in urging Rubio to run for reelection in the Senate, despite having spent months on the campaign trail mercilessly mocking him:

So just to recap some of the highlights (or lowlights) of the time Rubio and Trump spent campaigning against each other: Rubio said he would not trust Trump with the nuclear codes. Trump mocked Rubio's nervous sweating by splashing a water bottle around and going "It's Rubio!" And, of course, Rubio made a "small hands" joke about Trump, leading Trump to defend the size of his manhood during a televised debate. How is this America?

Perhaps Rubio's capitulation really does come from intense Hillary Clinton hatred, so intense that he thinks she would be a more dangerous president than a man who does not seem to have any real policy positions besides building a big wall, and who doesn't outright condemn the Ku Klux Klan (something Rubio previously called out on Twitter, saying that Republicans "cannot be a party that nominates someone who refuses to condemn white supremacists"). Maybe it stems from Rubio's fear of being left behind by his party, as leading Republican politicians dutifully fall into line behind someone they once said they could never stomach supporting. Or maybe it's simply him trying to watch out for his own political future and not make enemies just in case Trump really does manage to take control of the White House.

Whatever the real reason for the tepid endorsement, it doesn't make the upcoming general election look any less scary.