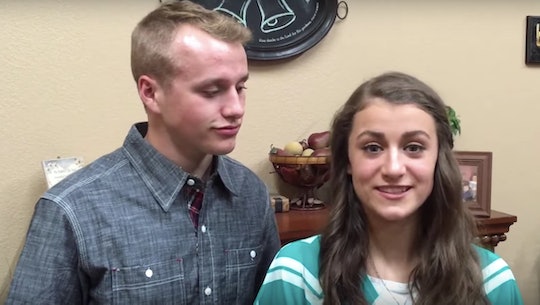 Josiah Duggar is going to be marrying his girlfriend, Lauren Swanson, soon, but she's not the first woman he has courted. A lot of fans of the family from Counting On were left wondering, why did Marjorie Jackson and Josiah Duggar stop courting and break up? Well, Jim Bob and Michelle's eighth-born child hasn't been super upfront about why his last relationship didn't make it to marriage, but many people speculate that it could have to do with drama surrounding the Duggar name.

The news of the Swanson and Duggar's engagement comes less than three months after they announced their courtship in late January, according to E! The 21-year-old Duggar son is now engaged to 18-year-old Swanson after six weeks of courting. The couple reportedly said that they're excited to see both of their two families come together for their marriage, knowing that the wedding will take a lot of planning since they have such big families on both sides.

"Lauren and I are engaged!" Duggar reportedly told E! "We're very excited to get started and so thankful for how God has brought our lives together."

Duggar and Swanson seem super happy together (from photos), but fans are still curious about what in the heck happened with his previous relationship.

Duggar met Jackson while he was taking Spanish lessons from her mother, Analucia, according to People. But they really started to take a liking to each other when they went on a mission trip to El Salvador together. Duggar and Jackson then announced that they were officially courting in April 2015, and, in their video announcement, Jackson explained, "courtship is like dating with a purpose."

But, after just four months, they decided that they didn't want to date with a purpose anymore, according to The Hollywood Gossip. Neither of their families offered any clear answers as to why they ended things, but both maintained that things ended cordially between Duggar and Jackson. Nevertheless, the failed relationship makes Josiah Duggar the first of his generation to enter a courtship that didn't result in marriage, according to The Hollywood Gossip.

At the time of the break up, Duggar released a statement explaining what had happened.

"Marjorie and I had a good time together," he wrote, according to In Touch Weekly. "We were just trying to follow God's lead on everything. She didn't feel that it was the right timing then, so we called it quits for a bit."

The Duggar family also released the following statement to People announcing the breakup:

Both Josiah and Marjorie have enjoyed getting to know each other and to build their friendship over the past months. We are so grateful that they each are seeking the Lord’s will for their future. A few weeks ago Marjorie and Josiah agreed to end their courtship, keeping in step with what they believe the Lord’s will is. Both are thankful for the time getting to know each other, and their families continue to enjoy each other’s company and close friendship.

Some fans have speculated that Jackson ended things with Duggar because of drama surrounding the Duggar name. Their breakup came write after Josh Duggar's sex abuse scandal and, in one of Jackson's two published books, Devoted, she reportedly indirectly throws shade at Josh Duggar, according to OK! Magazine.

Yup, Jackson went on to publish two books, according to the International Business Times, and Duggar went on to get engaged to Swanson. So it appears as though they're both doing well post-breakup regardless of the reason behind it, and that's all that matters.