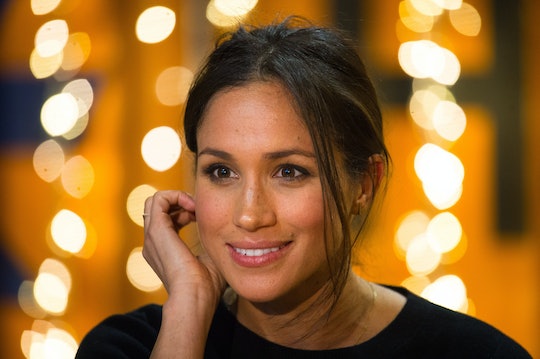 It Looks Like Meghan Markle Just Disappeared From Social Media

Look, the world is about to get a new royal, so you should probably just expect that coverage of the upcoming nuptials will be pretty widespread for the foreseeable future. Because of this, people have been pretty obsessed with just who the future Duchess of Sussex is, and taking to Instagram to, for lack of a better word, stalk the lucky lady. But now, four months before the big royal wedding, it looks like Meghan Markle has deleted all of her social media accounts.

In case you missed it, one famous actress is about to be one step closer to becoming an actual royal. Markle, who is known for her role on the USA drama, Suits, is officially getting married to Prince Harry, and it's getting real. The wedding is set to take place on May 19, 2018, but before then there are definitely going to be (and has been) a lot of changes in store for both Markle and Prince Harry.

And for those who may want to follow the future wife of the man who's fifth in line to the throne, well... you can't. As E! News reported on Tuesday, Markle has slyly deactivated her Twitter, Instagram, and Facebook accounts. Yep, fans can no longer go back and look at Markle's cute selfies from years ago, or all of her gorgeous food photos or sweet shots of her dogs. Sadly, Markle's social media presence as a single, independent woman is gone.

But really, that isn't too surprising. Before Markle started dating Prince Harry, Markle kept a relatively low profile, despite being an actress. In fact, in April of 2017, Markle shut down her lifestyle website, according to People, six months after it was first reported that she was dating Prince Harry, whose relationship reportedly started in October 2016. Since then, the two have kept a very low profile and didn't make their first official appearance together until the annual Invictus Games in Toronto on Sept. 24, 2017, as Vanity Fair reported.

Since then, their relationship has been full speed ahead after their engagement was announced on Nov. 27, 2017. Really, Markle's latest move in deleting her social media accounts makes total and complete sense. Back when Prince Harry first announced their relationship to the public, he released a statement through Kensington Palace, requesting privacy. According to INSIDER, the statement read:

Prince Harry is worried about Ms. Markle’s safety and is deeply disappointed that he has not been able to protect her. It is not right that a few months into a relationship with him that Ms. Markle should be subjected to such a storm. He knows commentators will say this is "the price she has to pay" and that "this is all part of the game." He strongly disagrees. This is not a game - it is her life and his.

It has also been speculated that Markle took down her blog and website in order to maintain privacy in the midst of such public scrutiny since being romantically linked to Prince Harry. When she took down the site, named The Tig, last April, Markle penned a message to readers to explain why and expressed her deepest gratitude to those who let her be a part of their lives. According to E! News, she wrote:

After close to three beautiful years on this adventure with you, it's time to say goodbye. What began as a passion project (my little engine that could) evolved into an amazing community of inspiration, support, fun and frivolity. You've made my days brighter and filled this experience with so much joy.

So now, the only way to learn about Markle is through interviews, public outings, anonymous sources, and some very serious reporting. Of course, those are a plenty, and she is an extremely involved person when it comes to charity and helping others. Now that she's retiring from acting, it seems as though Markle will have plenty of time to continue doing what makes her happy, even without an Instagram to post photographic evidence to.