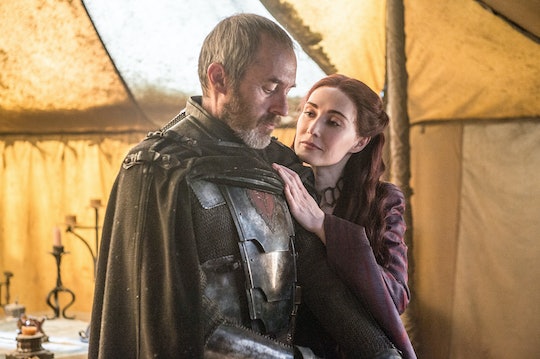 Why Did Melisandre Transform Into An Old Woman on 'Game of Thrones'?

Melisandre's super naked sex magic is something of a running joke on Game of Thrones by now, but in the season 6 premiere her magical misadventures took an unexpected turn. After removing her dress, Melisandre also took off her signature necklace and as she did, her body began to age until she looked a lot more like an ancient crone than usual. So why did Melisandre transform into an old woman on Game of Thrones?

It seems like Melisandre's necklace is actually keeping her young, and she's a lot older than anyone ever knew. Her powers are mysterious even after everything we've seen, and they seem to work as often as they don't. She was able to whip up that Renly-slaying smoke baby, but she wasn't actually able to get Stannis on the throne – even after she barbecued poor little Shireen. Her age-defying abilities are a new facet of her curious powers and they definitely seem to hinge on her fabulous necklace, which may be under an enchantment of some kind. She transformed because she removed it, which definitely leads me to believe the necklace is necessary for maintaining her youth and beauty.

Then again, viewers are already noticing that that might not be true – Melisandre has been seen in the past sans necklace and she was her usual spry self. So, Game of Thrones, what is the truth?