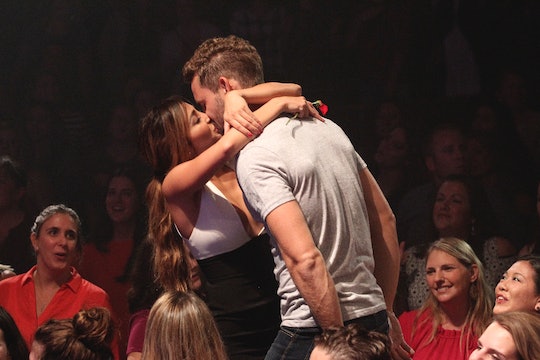 As the season of The Bachelor goes on, we know historically that eliminations become more and more difficult. From learning damning information about contestants to sending someone they had chemistry with home, the bachelor needs to make some tough choices as it gets closer to the end. On Monday night's episode, Danielle L. was hurt when she was chosen for a two-on-one date, because she knew it could end in her going home. Unfortunately... she was right. Why did Nick eliminate Danielle L. on The Bachelor? They really connected previously this season.

Danielle and Nick had clear chemistry in previous episodes when he picked her for a one-on-one date. It was one of those classic Bachelor dates that ended in them making out at a concert in front of a crowd of people. Actually, Danielle and Nick had two experiences like that: one on their one-on-one, and one when Danielle won a group date with the Backstreet Boys. Lucky!

Well, so we thought. Apparently Nick did not feel the connection that she did. After he gave Danielle a rose and she came to St. Thomas with the rest of the contestants, Nick realized along the way that Danielle was not for him. He set up a two-on-one with her and Whitney... and ended up sending both women home. Initially, he broke up with Whitney (who we totally forgot about, but that's besides the point). Usually in two-on-ones, one contestant stays and one goes – but Nick had other plans.

During dinner with Danielle, Nick broke it off with her. Danielle was clearly upset, but so was Nick. "I had incredible excitement about and so much optimism so much hope for Danielle," he said in a confessional after she was whisked away to her limo.

Nick continued to say that Danielle was full of love, but "maybe it's me that can't reciprocate the type of love she's willing to give." While Nick is super dramatic, his intensions were clear: he was not falling in love with Danielle, and did not want to leave her on. This elimination was arguably the roughest this season to date. The episode ended up with Nick crying and pouring his heart out to the remaining contestants.

If this is how Nick reacted to sending Danielle L. home, it's only going to get harder and harder from here on out. How Nick whittles down his choices even more, we just have to keep watching.