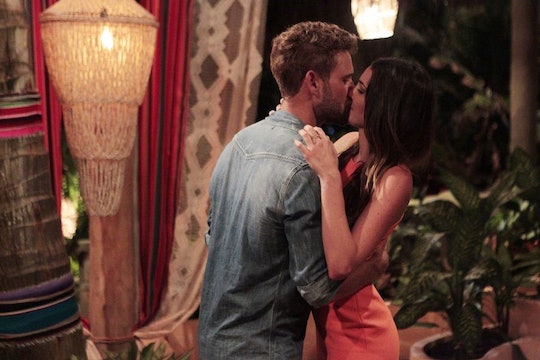 Why Did Nick Viall & Jen Saviano Break Up? 'Bachelor In Paradise' Will Show All

On Nick Viall's third go-round to finding love on television with Bachelor in Paradise, he seemed to have hit it off quite nicely with Jen Saviano when she arrived a few weeks into the show. Nick hadn't made any real connections with anyone else yet but when she arrived, it looked like his love life was finally looking up. Now that we know that Nick Viall is set to be the next Bachelor, it's clear that something in the relationship went wrong at some point. Why did Nick and Jen from Bachelor in Paradise break up? There wasn't any big blow out, and it looks like the relationship fizzled for more mundane reasons.

Nick hasn't said much about how his relationship with Jen ended, and we'll probably get more details when the Bachelor in Paradise finale airs on September 7. What Nick has said might give us some clues as to why it didn't work out. He's said that he tends to fall in love hard, and very quickly, which we saw on both of his tenures on The Bachelorette. He certainly hasn't forgotten that he got his heart broken twice already on television, and this is why he always planned to take things more slowly on Bachelor in Paradise. Perhaps because he took the time to feel things out with Jen rather than rushing into a relationship, he was able to see that while the two certainly had a connection, it wasn't strong enough to consider marriage quite yet.

In an interview with Glamour, Nick said of his relationship with Jen,

She’s been great, and I’m really lucky to have met her and have this connection with her, but it is different for me. I’m kind of known as the guy that says screw it and goes for it, and I think during my time here, I’ve had a little more pause. I’ve kind of run out of runway here to take huge leaps of faith—and plus, I think this world has a different effect on everyone.

As for Jen, her reaction to the announcement of Nick Viall as the next Bachelor was... succinct.

Clearly, we'll have to wait and see exactly what went down between these two, but their feelings for each other were obviously quite real. Maybe Jen will even pull a Nick and show up halfway through his season. You never know.