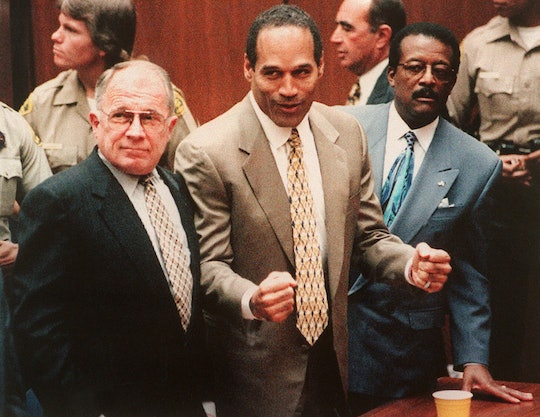 Why Did O.J. Simpson's Jury Find Him Innocent? The Murder Case Was Surprisingly Complex

It’s been 21 years since O.J. Simpson was tried and acquitted for the murders of Nicole Brown Simpson and Ronald Goldman. Twenty-one years since people gathered in bars and living rooms and on the streets of New York and awaited the verdict with bated breath. And while the decision thrilled some and infuriated others it is, undoubtedly, the case which defined a generation (hence why it is the focus of American Crime Story, season one). But 21 years later, many find themselves still wondering how O.J. Simpson walked away. So why did O.J. Simpson’s jury find him innocent?

In a 2014 interview, Patricia Williams, a professor at Columbia Law School, told NPR that the problem wasn’t the jury, but how the prosecution presented the case to the jury. "The prosecution failed in its burden of proof wanted a conviction, no matter what," she said.

Add perjury charges — specifically against Los Angeles police detective Mark Fuhrman — botched evidence collection, and a general lack of evidence to the mix, and there was one glaring problem in the Simpson case: the window of reasonable doubt was left open. Which is a sentiment many jurors echoed in post-verdict interviews, with USA Today and various other outlets.

Just last year, one juror — David Aldana — told NBC Los Angeles he still wasn't sure whether Simpson murdered Nicole Brown or Ronald Goldman, but Aldana also said he knew there was nothing further he (or the other jurors) could have done at the time:

On the evidence that they gave me to evaluate, it was crooked by the cops...the evidence given to me to look at, I could not convict. Did he do it? Maybe, maybe not [but I didn’t have enough evidence].

It seems many Twitter users are just as conflicted and confused today as Aldana and his fellow jurors were 21 years ago:

However, Laurie Levenson — who teaches criminal law at Loyola Law School in Los Angeles, and is a former federal prosecutor — believes part of the problem does lie with the jury, or at least with those selected to be on the jury. "In reality," Levenson told NPR in 2014, "we needed more people to come forward and do their jury service."

While many of us have our own assumptions on what happened in the O.J. Simpson case, we may never know exactly why Simpson was eventually acquitted of his criminal charges (or whether he is, in fact, guilty). Hopefully, FX's new hit series, The People v. O.J. Simpson: American Crime Story, will reinvigorate the discussion.