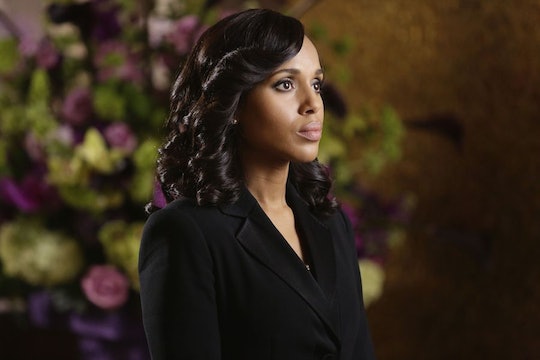 Why Did Olivia Kill Andrew on 'Scandal'? Here's The Backstory

Thursday night's episode of Scandal brought back the character of Andrew Nichols, former Vice President. Andrew was responsible for Olivia's kidnapping in Season Four, after which, Huck caused him to have a stroke by injecting him in the back. We thought we'd seen the last of him, but he returned – only to be just as much of an jerk as before. When in a room alone with Olivia, he brought up her traumatizing kidnapping, causing her to snap and beat him to death. Like I said, total jerk. Why did Olivia kill Andrew on Scandal? It seems like a lot of fans were stunned by what happened...possibly because the events leading up to the moment were largely distant and a bit confusing.

Let's backtrack to why Andrew was ever relevant. In earlier seasons, he was Fitz's Vice President. He was also having an affair with the then-First Lady, Mellie Grant. So we knew he was a shady character, but it wasn't until Season Four, however, that we really learned what a horrible person he was: Andrew orchestrated Olivia's kidnapping to force Fitz to initiate war with West Angola and the United States. Of course, Olivia was saved and war was avoided...but she suffers PTSD from the experience nonetheless (because duh). When the Gladiators found out the kidnapping was Andrew's doing, they took matters into their own hands. At the time, Huck was in one of his "I don't kill people anymore" phases...so he instead caused him to have a stroke (because that's Huck "being good"). ‌ ‌

Up until now, Andrew had been in the hospital in a coma. On Thursday's episode, however, he had woken up and was ready to talk. He threatened to tell Lillian – the woman writing an article about Fitz's last few months in presidency, who is also unsurprisingly sleeping with him – that Fitz went to war with West Angola for Olivia. Andrew would also conveniently leave out that he was a part of this.

Olivia knew she had to put a stop to this. She sent Mellie to talk to him, but that was a bust. She sent Huck to kill him, but that didn't work either. Finally, she wanted him to recant his statement and sign an NDA. Andrew made the Gladiators jump through hoops – to the tune of pooling together millions of dollars – only to go back on his word. He thought he had won, and started saying awful things to Olivia that triggered her PTSD. She snapped, and killed him. More to the point, she literally beat him to death with a chair. Like, she killed him.

There are several glaring reasons why Olivia killed Andrew. He is the reason that she was kidnapped, and she continues to suffer from the experience. Not only that, but he had no remorse or guilt, and was actively setting out to hurt her (and Fitz, and pretty much everyone) even more. Perhaps to a new viewer, Olivia may have acted rashly – but to a longtime Scandal fan, her actions make perfect sense. It will be interesting to see what happens when She Who Wears The White Hat tries to cope with her PTSD-triggered homicide.

More Like This
Olivia Newton-John's Daughter Says Her Mom Was Her "Safe Place" In Lovely Tribute
Netflix Reveals The Official Teaser Trailer for Wednesday
Kristin Bell Shared Some Sweet, Rare Photos Of Her Daughters From A Family Vacation
What Parents Need To Know About Marvel's New She-Hulk Series Coming To Disney+