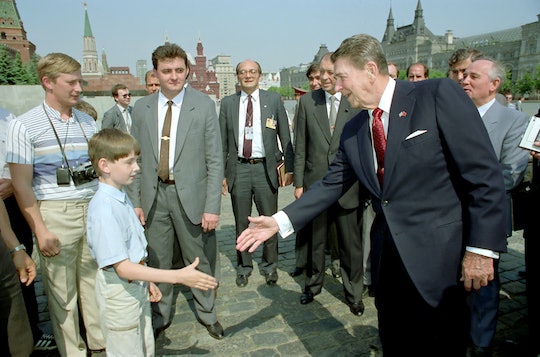 Why Did Reagan Miss The Correspondents' Dinner?

On Saturday, Capitol Hill media gathered at the Washington Hilton hotel for the annual White House Correspondents' Dinner. Noticeably absent was the president himself; President Trump skipped the media shindig to host yet another post-election rally at the Pennsylvania Farm Show Complex and Expo Center in Harrisburg, Pennsylvania. While Trump is the first president since Ronald Reagan to have skipped out on the annual event, why did President Reagan miss the White House Correspondents' Dinner in 1981? Turns out he had a pretty good reason at the time: Reagan was recovering from an assassination attempt.

Republicans often hold up Reagan as the paramount representation of their party, so it wasn't shocking that many Trump supporters were pointing to the fact that Reagan also didn't attend the dinner in 1981 as a justification for why it was acceptable that Trump didn't attend. The issue with that argument, though, is that Reagan actually had a good reason: he was in recovery after John Hinckley Jr. attempted to assassinate him, according to the Los Angeles Times. Trump has not been the victim of an assassination attempt, nor has he been ill. In fact, he spoke at a rally in Pennsylvania just prior to the dinner, proving that he was indeed well enough to travel, socialize, and give a speech.

Additionally, though Reagan didn't attend the 1981 Correspondents' Dinner, he did phone into the dinner to thank many of the journalists and to offer his support of what the dinner stood for: the dedication of the free press. First Lady Nancy Reagan even got on the phone at one point to speak to some of those who were honored that year. One of the people she spoke to was Sarah Brady, who was a gun violence prevention and also the wife of James Brady, Reagan's press secretary. He said to her, according to The American Presidency Project:

Sarah, you remember those days in the hospital when you and I had many conversations. And we both agreed that you and I, from now on, had a bond that was very special and that nobody could ever break. It was just something between you and me that was ours. And I want you to know that you've never left my thoughts and my prayers, and all my love and all my prayers are with you as they always have been. And I know that both our fellows are going to make it, and I send you and Jim all my love.

It was clear that both of the Reagans, even if they had their differences with the press, realized that cultivating relationships with the press was pivotal to helping the American people access information about the workings of the president and the government. Even though he was recovering from an attempted assassination, President Reagan still phoned into the event.

President Donald Trump not only refused to attend the Correspondents' Dinner, he berated it and those who attended (and, among those people were well-known journalists such as Bob Woodward and Carl Bernstein, whose work helped uncover the Watergate scandal). At his rally on Saturday, Trump said of the dinner, according to the Hill:

A large group of Hollywood actors and Washington media are consoling each other in a hotel ballroom in our nation’s capital right now.

He also said "They would love to be with us right here tonight. They’re trapped at the dinner, which will be very, very boring."

He also continued to call the press "fake news," a moniker that was refuted by journalists repeatedly at the dinner. The press is integral in helping hold government power accountable, and Trump's attacks on them are a direct violation of a founding principle of the constitution. His lack of attendance at the dinner wasn't shocking — it was a continuation of his attempts to discredit and shut down one of the most powerful checks Americans have on the U.S. government.