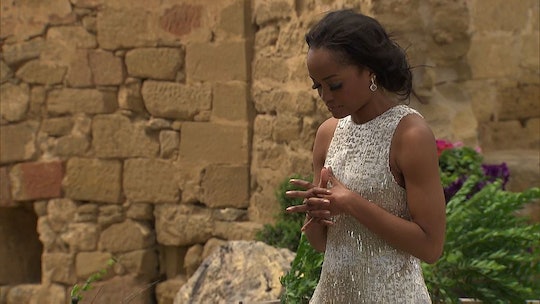 Rachel Lindsay's turn as The Bachelorette wound down this week as she was forced to watch the season finale live along with the rest of us. Poor Rachel. It's not enough that she has to suffer the scrutiny of being the first black Bachelor/Bachelorette; producers also decided to experiment with never-before-tried stunts like the early first impressions reveal. For the finale, they decided to subject Rachel to a live viewing along with the studio audience, interjecting with live-reaction commentary. So we had her on hand to explain directly: why did Rachel eliminate Eric on The Bachelorette?

He was the first of her three remaining suitors to go, leaving Peter Kraus and Bryan Abasolo vying for Rachel's final rose. Eric was ostensibly the least experienced guy left — he'd never been in love before and the last woman he brought home to meet his family was his senior prom date. It earned him some skepticism from other contestants, but he did a pretty good job of not making their judgment Rachel's problem. However, Eric definitely did need an awful lot of handholding from Rachel whenever he got really vulnerable with her. It always seemed like he needed tons of support and emotional fluffing and congratulations in the moments leading up to, during, and immediately after any big, vulnerable share.

Of course, there's nothing wrong with needing support, and no one should be written off just because they've never been in love before. But spirit-guiding a guarded, serious relationship newbie through his emotional, wide-eyed foray into falling in love for the first time doesn't exactly seem like the relationship Rachel is looking for right now. Still, Eric's playful nature was obviously super lovable to Rachel and she did seem to have very genuine affection for him. Plus, Eric was actually willing to propose, unlike Peter. Said Rachel right before eliminating him:

With Eric, our relationship has just continued to progress at such an extreme rate. Like, everything moves so smoothly, we don't have any hiccups, I don't see any red flags. I'm not confused. I know exactly how he feels. Eric was saying, 'I love you and this is what I want and this is what I'm ready for.' And Peter's saying, 'I'm not.'

Unfortunately, Rachel admitted that she was simply further along in her relationships with Peter and Bryan, and so she decided to let Eric go. On the bright side, they had a super mature goodbye and seem to very genuinely wish the best for each other. And Eric did get an I love you from Rachel in the end; it was just as she was breaking up with him instead of a more hopeful one.