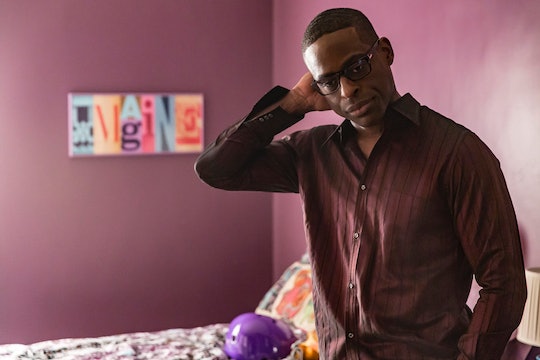 Randall May Be Hiding Something On 'This Is Us'

Silly me, here I was thinking that we only had William and Jack to worry about on This Is Us, but it seems like we can now add Randall to our list of concerns as well. After watching Randall stress over both work and William throughout Tuesday night's episode, titled "I Call Marriage," we saw his hand start to shake as he reached for a glass of water on the nightstand. So why did Randall's hand shake on This Is Us? It seems to be something he's trying to keep hidden, which makes me very worried that this wasn't just a small, random spasm caused by stress.

Now, to be clear, I am not a doctor and have no authority to jump to any medical conclusions. (Unless watching 13 seasons of Grey's Anatomy helps in any way?) So any presumptions I make here are just as a concerned fan who has a habit of thinking the worst when it comes to this heart-wrenching show. I don't know about the rest of you, but when I saw his hand start to shake, my immediate diagnosis was Parkinson's disease since shaking can sometimes be a common side effect. However, that is certainly not the only possible explanation. It could also be a sign of an essential tremor, Multiple Sclerosis (MS), or even a non-disease related issue, such as a tremor caused by stress and lack of sleep — both of which Randall has been going without lately.

Basically, it could be a wide range of possibilities, some of them more serious than others. But considering that the show made a point of focusing our attention on it, I have a feeling the problem isn't going to just go away. It's more of a question of how much Randall knows about what's happening and how long this has been going on. Has he gone to a doctor to get checked out and knows exactly what is causing this, but has yet to share it with his family? Or was this the very first tremor he's ever experienced? Because, in that case, it really could just be stress related.

A big part of me wants to write it off like it'll be no big deal. But then I remember this is the series that has killed off Jack, one of the most beloved characters to have ever been created. So there's really no telling what Randall's future has in store. And based on the not-so-surprised expression that came across his face when this happened, I have a feeling he's been hiding this secret for a while, and the stress of work/William has possibly been making it occur more and more. Let's just hope he comes clean with Beth about it, so they can face whatever is coming together as team.