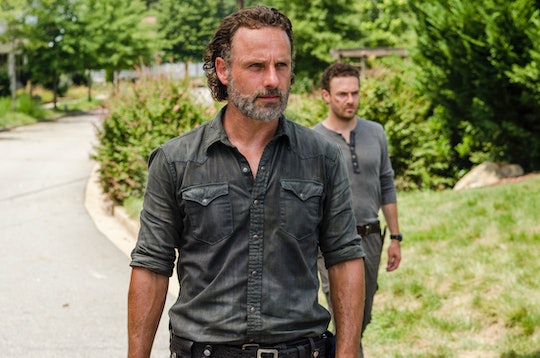 Let's Discuss Rick's Reaction At The End Of 'TWD'

In the Season 7 midseason premiere of The Walking Dead, "Rock in the Road," Rick and his ragtag crew of survivors took the first concrete steps towards forming a resistance against Negan and the Saviors. That forward momentum took them from the Hilltop to the Kingdom and then back to Alexandria — and then out into the world again to investigate the suspicious disappearance of Father Gabriel. The episode left them in a dangerous situation, surrounded at gunpoint by a mysterious new group of survivors who didn't seem too keen on strangers. It was a familiar situation for the the crew, but not a happy one, which made Rick's reaction to it incredibly weird: when faced with all those weapons, Rick smiled. But why did Rick smile on The Walking Dead?

On the whole, the episode had a much more optimistic tone than the first half of the season. It finally felt like Rick and the other Alexandrians might have a few victories coming up in the future after a long string of losses. But that sense of optimism doesn't really explain Rick's reaction, because he didn't crack a smile during many of the less tense moments throughout the episode. Even when Michonne tried to cheer him up, things were still bleak with Rick. So what inspired the sudden smile?

It seemed like a direct callback to an earlier moment in the episode. After Rick and Michonne clotheslined half a herd of walkers with the help of two cars and a steel cable, she attempted to calm Rick down and remind him that things were going to be alright. She told him to smile, because they were survivors and they were going to live through this. But Rick still seemed too overwhelmed by the close call with the herd to heed her advice.

Rick's smile at the end of the episode could have been a sign that her words had finally gotten through to him. Despite the dangers waiting around every corner, Rick knew that they could handle everything that was thrown their way and still come out on top. After weeks of following the rules, Rick was ready to fight back — and he might even be excited about it. Now every new threat is just one more thing they'll overcome.

Rick's end of episode smile may have felt incongruous in context, but it was a sign of the new optimism that has infected the show. Things are different now. They might even be better. And Rick was feeling that change.