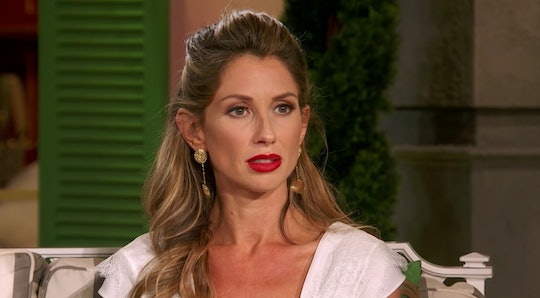 Looks like some of that southern charm has officially worn off. Ashley Jacobs, 33 of the Bravo reality show Southern Charm just confirmed that she and Thomas Ravenel, 56, have called it quits after a little more than a year dating. Jacobs opened up about the split online this week, keeping fans in the loop on the breakup and her life. That being said, why did Southern Charm's Ashley Jacobs and Thomas Ravenel break up?

On Wednesday, Jacobs, who is a registered nurse, confirmed that she and Ravenel, a former politician, ended their relationship, as People reported. She shared the news in an Instagram Live (which appears to have disappeared as of publication) with the disclaimer that she wants to keep some parts of her breakup private. “I don’t want to comment but there are just some things I’m trying to handle privately,” she said in the Instagram Live, which looks like it was filmed in her car, according to People. “Before I say too much, I love Thomas and I’ll always love Thomas. I’ll always care about him.”

Jacobs also opened up about how breakups can be difficult and confusing. She also said, as reported by People:

I think everyone’s been through breakups before but it’s hard. It’s not easy. … Sometimes you just want to stay quiet and figure out what the next move in your life is going to be. … I’m just trying to take care of myself the best way that I can.

Additionally, Jacobs deleted everything off of her Instagram that was posted between late April 2017 (just before she and Ravenel started dating) and now. She replaced all those posts with a selfie, captioned with a long paragraph celebrating her "failures." She wrote:

Jacobs has yet to pinpoint a specific reason as to why she and Ravenel broke up, though it wouldn't be a surprise if it had something to do with allegations multiple women have filed against him and the attention it has gotten. In May 2018, a woman accused Ravenel of sexual assault and battery, as Deadline reported, and in May, Ravenel's former nanny (he has two children), who is known as "Nanny Dawn" on Southern Charm, publicly accused him of sexual assault, as People previously reported. In response to the allegations, Ravenel's lawyer Richard P. Terbrusch told People:

My client enjoys a certain degree of fame, which has unfortunately made him a vulnerable target for such claims ... The person this woman describes is simply not the man that I know. My client is a loving father, successful businessman, and upright member of the community. He is appalled and hurt by these allegations — and is committed to defending his reputation in the appropriate legal forum.

Jacobs also responded to the allegations during the Southern Charm's reunion, according to Glamour. "It is all hearsay," Jacobs told Andy Cohen, as Radar Online reported. "He's not been charged with anything. These are just allegations. It used to be 'You’re innocent until proven guilty,' and now you’re guilty until proven innocent."

Romper's request for comment from Ravenel's rep regarding the allegations was not immediately returned.

On Tuesday, according to Page Six, Ravenel confirmed that he would not be returning to Southern Charm next season. “I’m not doing the show anymore. In the contract they have the right to fictionalize your story," Ravenel tweeted from his private account, as Page Six reported. "They took advantage of me. I decided I’ve got too much to lose and informed them I’m not coming back."

Hopefully the upcoming season of Southern Charm will provide more insight on Jacobs and Ravenel's breakup.