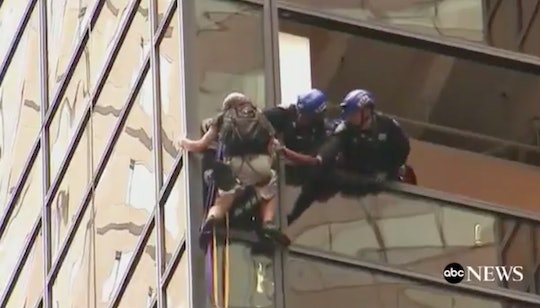 Why Did Steve From Virginia Climb Trump Tower In The First Place?

On Wednesday, one brave soul decided he would pull out his suction cups and climb Trump Tower in midtown Manhattan. He made it just over 20 floors before authorities reeled him in through a window with a rope. It was not a great way to go out in the name of protest or adventure or anything. But that's sort of what everyone wanted to know in the first place, watching the man bravely make his way up the building: Why did Steve from Virginia climb Trump Tower in the first place?

We might have to wait a bit to find out any juicy details. But they are bound to be great. Here's the deal: around mid-afternoon, a skinny white man began ascending Trump Tower. I don't know where you were, but I will never forget the moment I was forced to watch "breaking" coverage of Steve from Virginia (and, oh, what a moniker) scale Trump Tower. It reminded me vaguely of being a pre-teen gathering around a television to watch O.J. Simpson's white Bronco speed down a freeway. Where was Steve going? How long would this go on? How would it end? Apparently, Steve did have a plan. Or something like a plan. Sort of like Donald Trump, the owner of the building, himself.

According to Pix11.com, a local New York City news outlet, a video was reportedly made on Tuesday by Steve himself, claiming that he wanted to climb into the building to see the Republican presidential nominee himself. The man, who has not yet been verified to be Steve from Virginia himself, said, "Believe me, if my purpose was not significant, I would not risk my life pursuing it. If I had sought this through conventional means, I would be much less likely to have success because you are a busy man with many responsibilities."

Steve ended the video by urging viewers to "Vote For Trump." But then again, the Internet is a crazy place and so many copycat videos have surfaced, that I think it's in America's best interest to wait for Steve's press conference. Because he's going to get one. Steve will get a press conference and meme for scaling a presidential candidate's property. Everyone should be thankful that Steve was a white kid climbing a building and not a person of color. The news cycle would be a very different place right now, no matter what Steve from Virginia's intentions were when he started.

Until then, the Internet became its best self on Wednesday evening. Some wondered if this kid was a protestor or supporter — what would really be on that banner once we had climbed the 68 floors? Still others questioned if Steve was a plant from the Trump campaign, to take attention away some of the negative attention the candidate was drawing this week.

Although a climber like Steve could also have just been beta testing a new Pokestop. Or trying to prove that any wall Donald Trump wants to build is entirely scalable, just by sheer will. Make America Great Again, Steve. Or just symbolize sort of everything that has gone so very, very wrong with this election cycle.