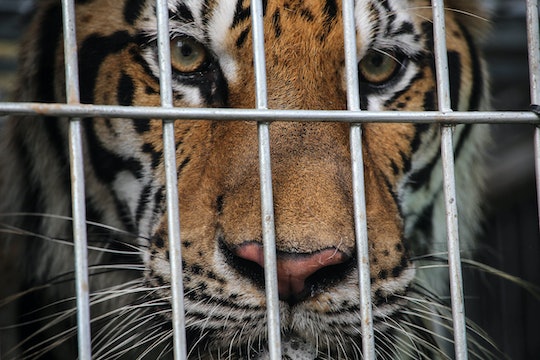 Why Did Thailand's Tiger Temple Close? It's Been Plagued With Accusations Since January

It has been a heartbreakingly tragic week for animals and the news just got even more depressing. Over 100 tigers were removed from Tiger Temple in the Kachanaburi province of Thailand this week, an attraction which had been under investigation since January, and the attraction was shut down. The location was an incredibly popular tourist attraction, which left many visitors questioning why exactly Thailand's Tiger Temple had closed and whether it would ever re-open.

The beloved attraction, which was known for allowing visitors to get up close and personal with tigers and even take selfies with them, closed on Saturday under suspicions of animal abuse. This might not come as a surprise to some in the wildlife advocacy community, as the attraction has been plagued with similar allegations since January with suspected activities reportedly occurring perhaps even farther back than that.

According to local media and BuzzFeed, on Saturday, the last 137 tigers that were still alive were removed from Tiger Temple and five men, including three monks, were arrested under the suspicion of wildlife trafficking and animal abuse. The closing of Tiger Temple and the investigation took over 1,000 state personnel — including wildlife officials, policemen and vets. Luckily, according to The New York Times, the live animals found at Tiger Temple will be taken to three animal refuges elsewhere in Thailand.

In addition to the tigers, those involved in the raid found 40 dead tiger cubs, a dead bear, and animal horns all on the premises of the temple, according to Al Jazeera. Other suspicious items like tiger skin were also found, according to CNN.

But what were the specific allegations that prompted the raid and removal of the tigers? Controversy has been surrounding the temple now for the past six years. Animal advocates have been vehemently against allowing so many tourists to take selfies with the tigers and questioning the operations of the temple. According to Al Jazeera, in 2010, animal welfare groups alleged that the temple resembled a breeding facility and even made claims of animal trafficking. In 2014, welfare charity Care For The Wild International called for people to stop taking photos with wild animals. "People want to copy the photos they've seen online, which leads to more animal suffering," Chris Pitt, the charity's campaigns and communications manager said.

The location was originally a Buddhist temple some 20 years ago, according to the BBC, before it started taking tigers in and became a very large tourist attraction. Trip Advisor lists Tiger Temple as the #4 tour to take in Thailand and the attraction has gathered almost 2,000 reviews. While the attraction has received 3.5 out of 5 stars on the website, the reviews are mixed. The photos posted on the website are even more heartbreaking once you know what went on behind the scenes.

However, it is still too soon for authorities to conclude that the temple was used for breeding cubs or cross-border trade. According to The Wall Street Journal, authorities are still investigating the temple.

For its part, Tiger Temple and its officials have denied all accusations and still maintain that the facility was doing nothing wrong, posting a statement on its Facebook page:

There are rumours and allegations constantly being spread on the internet about Tiger Temple. For years many were left unanswered, as the Buddhist way is to keep silent and not engage a fight. However now with a lot more focus on the Temple, it is time to respond. There have been a lot of recent posts about missing tiger cubs which accuse Tiger Temple of selling them to the black market. This is not true. ... The Temple does not force the tigers to mate nor does it run any type of breeding program. While the Temple does generate some income from tiger cubs born here through the tiger cub activities offered, the temple does not breed tiger cubs for sale.

Whatever eventually comes of the investigation, all animal rights activists can do is keep an eye on the situation and hope the tigers receive justice, if need be.