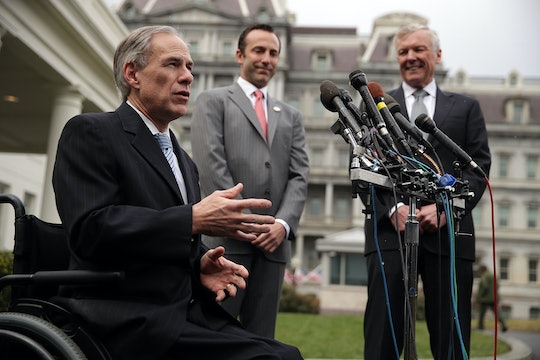 The ACLU Just Issued A Travel Advisory For This State

Ah, Texas. Where the beer is cold, the weather is hot, and the politics are red. And while the capital city of Austin may be a bit more liberal-minded than the majority of the state, the governor and majority of legislators are still very much Republican. Because of that, there have been an extremely high number of conservative bills proposed and passed in the Texas House and Senate this year already. And while many have been concerned with the high number of anti-choice bills currently being debated in the state, that isn't of as much national concern as something Gov. Greg Abbott did on Sunday night. In fact, Gov. Greg Abbott's latest move prompted the ACLU to issue a Texas travel advisory on Tuesday, taking the issue to a whole new level.

The latest legislation to be signed by Abbot gives officers in Texas the authority to demand the immigration status of anyone who they legally arrest or detain, and imposes punishments on those who harbor known illegal immigrants convicted of crimes. The bill was written by state Sen. Charles Perry (R-Lubbock), and has advanced quickly since it was first filed in November of last year.

The bill, S.B. 4, was signed into law by Abbot Sunday evening, but will not officially go into effect until September 1, 2017. However, the ACLU is already taking actions to protect citizens from the possible dangers it could present.

Romper has reached out to the governor's office and is awaiting a response.

The ACLU claimed that Americans traveling to Texas should now "anticipate the possible violation of their constitutional rights when stopped by law enforcement." In its justification of the travel advisory, the ACLU claimed that the bill could cause "widespread racial profiling, baseless scrutiny, and illegal arrests of citizens and non-citizens alike presumed to be 'foreign' based on how they look or sound."

So what exactly does this new legislation mean, really? And why should non-Texans be concerned? With "165 to 608 local and state governments with 'sanctuary' policies" currently in the United States, Texas' new law could have a ripple effect, according to The Washington Post, meaning that the ban against sanctuary policies in Texas is setting a dangerous precedent.

And while many Americans who are privileged enough to not have to worry about the repercussions of new laws like this may not be too concerned with what it means, there are far too many innocent lives that will be affected by it — including neighbors, friends, families, and businesses both inside and outside of Texas. Aside from the fact that it puts many communities on edge, it leaves plenty of legal immigrants concerned for their well-being as well, given that unfair profiling (intended or otherwise) will also play a major part in the new legislation.

Regardless of whether or not police agents will use the law as an excuse to legally profile someone based on race, the fact that it gives them the right to, is bad enough. The ACLU's decision to issue a travel advisory this week may have seemed extreme, yet in hindsight, it's anything but.