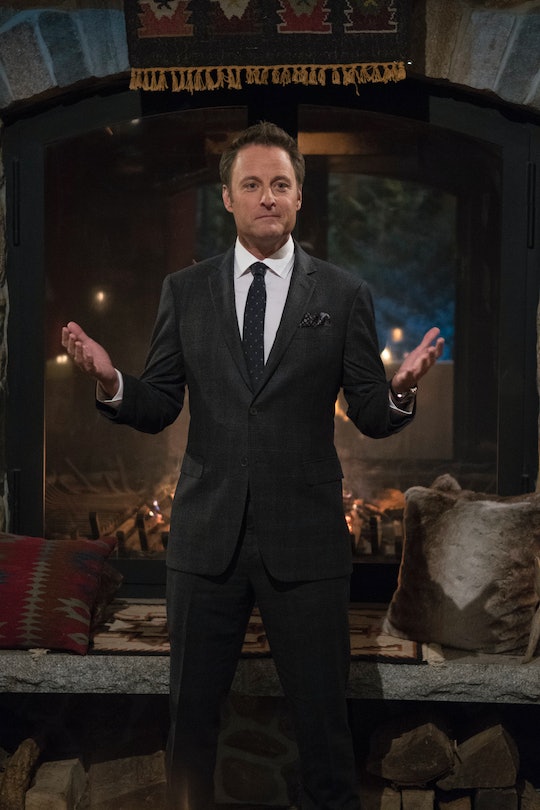 Well it's time for another spinoff of The Bachelor, and this time the show is changing things up. But not everybody is a fan of the new rules — specifically the part where the show completely changed up how people get eliminated. So why did The Bachelor Winter Games change the rose ceremony rules? Twitter is not happy about the switch up. And frankly, neither am I. This seems mean.

Normally at the rose ceremony, like on Bachelor in Paradise, contestants are allowed to give their rose to the person they would most like to spend the most time with. Sure, it still sucks not to get a rose but at least then you know that it's just because you didn't make a great connection with anyone. And that's OK! But this time around, Chris Harrison announced to the group that instead of giving roses to the people they liked, everyone would have to vote for the person they most wanted to leave the house. So the people who didn't get a rose on the first episode of the show got to revel in the fun fact that the other people had to actively dislike them. I am not a fan, Bachelor.

Clearly, I was not the only person who found this whole vote-the-losers-off-the-island style of rose ceremony deeply unsettling. I didn't like that idea way back in the day when I first saw it on Survivor and I like it even less now, when it suddenly forced all the contestants to sit around and decide which of the people around them they liked the least. At least on the other shows they get to sit around and argue over who they like the most and then try and build on a relationship from there. This style seems to be going for more of a survival-of-the-fittest method. One contestant even compared it to The Hunger Games. I can't say that he's wrong.

There is something truly tragic about seeing people walk away disappointed and rejected while wearing formalwear, so my heart broke even more than it already was when I saw that Eric Digger was voted off. I was inclined to like all of the women on this show (even the ones I don't know much about yet) until enough of them voted for Eric to leave. You guys just don't understand him. I didn't even understand him until his hometown dates with Rachel Lindsay. He's a great guy!

I truly hope that the show goes with a more traditional method of rose ceremonies in the future episodes. I don't like to see people being targeted by a group of other people. I get that this show is making love into a competition — which is weird enough in the first place, but there's something about identifying the person that most other people dislike that seems particularly harsh. Can't it just be about people falling in love without forming weird alliances? Because that would be great. I'm here to watch ridiculously attractive people make out and for Ashley I. to cry off her eyelashes. I'm not here to watch adults bully each other. It's a fine line, I understand, but still.

Who knows what's still to come for the rest of the season of The Bachelor Winter Games. Hopefully everyone falls in love and nobody goes away feeling too crushed. But the people have officially spoken. Nobody wants to do this weird backstab-y elimination anymore. Let's just go back to giving out roses to people we like.