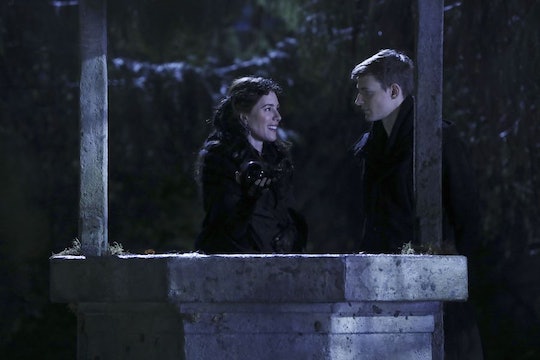 The Black Fairy's Backstory Will Be Revealed On 'OUAT'

The Black Fairy is the latest villain to wreak havoc on Storybrooke, and as is the case with almost everyone on the show, she's someone's relative. It turns out the Black Fairy is Rumple's mom, which has led fans to ask a lot of questions. How did she and Peter Pan end up together and more importantly, why did the Black Fairy abandon Rumple on Once Upon a Time? Thankfully, it appears fans won't have to wait much longer for the answer to that last question.

According to the official description for Sunday's episode, aptly titled "The Black Fairy," the show will flashback to when the Black Fairy was simply Fiona. As Rumple's mother, she learns from his fairy godmother that his destiny is prophesied and she does everything in her power to keep it from happening. In the end, she's forced to make a decision that changes the course of her and Rumple's lives forever.

It seems, just like with other villains on the show, Fiona wasn't inherently evil, but events in her life and choices she made led her to become the Black Fairy we know today. However, will finding out this truth make up for the bad things she's done to Rumple and the rest of the residents of Storybrooke in the present day? Once Upon a Time has a knack for reforming it's villains but that may not be the case for The Black Fairy, especially since she's supposed to face off against Emma in the "final battle."

However, once Rumple learns the truth about why his mother gave him up, that may greatly end up impacting Emma's chances of winning the final showdown. In the promo for the next episode, Emma asks him if he's really on her side and he confirms that he is in a way only he can. "I won't shed a single tear," he says vehemently. Still, as Emma points out, "no curse will ever be as terrifying as finding out why you were abandoned." Emma, of course, speaks from experience.

Could the truth about why his mother left him change Rumple's mind about facing off against her? The Black Fairy did say Rumple would eventually join him because he wanted to, not because she forced her to. Maybe this is the moment that makes him change sides.

Hopefully that doesn't happen, but with Once Upon a Time you can never really know who's good or who's evil, and characters have been known to switch sides time and time again. Fans will just have to watch and see what happens next.